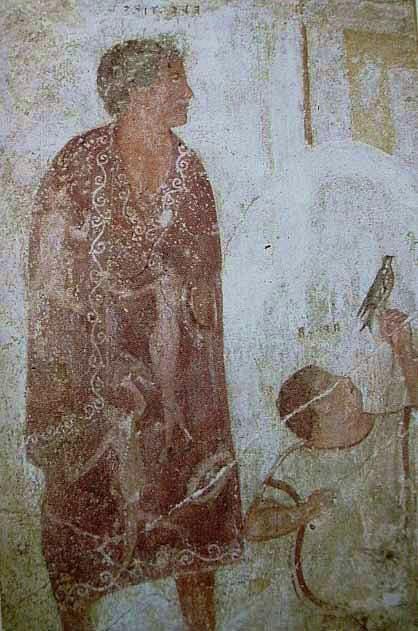 As well as the ability to interpret the future from lightning bolts, the Etruscans also observed the flight of birds for the purposes of divination. The process of interpreting the patterns of flight was known as taking the auspices (literally ‘looking at birds’). As was the case with understanding lightning portents, the sector of the sky where a bird flew was a determining factor to interpret the will of the gods based on the quadrant in which the relevant deity resided. The type of bird was also important. Doves transmitted messages from Turan (Aphrodite/Venus) whereas the king of the gods, Tinia (Jupiter/Zeus), used an eagle.
The Romans relied heavily on the act of auspication. It was an essential part of the politics of Rome. Before any decision of State was made, omens were observed through the flight of birds. This sometimes involved an augur releasing a flock of birds and watching whether they flew to the right or left. The term ‘sinister’ derives from sinistra the latin word for ‘left’ as it was considered an ill omen if the birds flew in that direction. Negative connotations of being left handed have continued for centuries and may well have stemmed from this concept.
In Rome the different bird calls of ravens, crows, owls and chickens were also used to identify divine will. The flight of eagles, vultures and woodpeckers all had significance too. The eating patterns of chickens were also observed. It was considered ill luck if, once released from a cage, the hens baulked at eating the proffered bread. I presume this form of divination allowed for some human manipulation of results!
The founding of Rome itself was based on auspication. When the two feuding brothers, Romulus and Remus, could not agree on the site upon which the city was to be built, they decided to test their abilities as augurs. Romulus saw twelve vultures settle on the Palatine Hill while Remus saw only six alight upon the Aventine. An interesting way to settle an argument.
The image is from the Francois Tomb in Vulci, Italy (circa 330BCE). It depicts the aristocratic Vel Saties who is wreathed with laurel and wrapped in a lavish purple cloak bordered with scrolls and embroidered with nude male figures holding shields.The Etruscan is observing a woodpecker in flight while his servant, Arnza, holds a female woodpecker attached by a string to attract the bird back. The woodpecker was sacred to the god of war Laran (Ares/Mars), and it is likely that Vel Saties was consulting the deity before a military encounter.