I always enjoy meeting authors who are committed to authentically depicting  their characters’ worlds and exploits. Lin Sten, a fellow ancient world afficionado, joins me today to explain some of the intricacies of his research for his Arion’s Odyssey tetralogy.

Research for my tetralogy Arion’s Odyssey, set in Classical Greece, began haphazardly in my youth with my excitement over an image of an ancient Greek helmet; it continued as my interest in shipping and oared ships grew. As an adult, a significant step forward in my motivation to write a fictional tale, and do research for it, occurred in 1981 when Scientific American published a fascinating article about triremes (“Ancient Oared Warships”). Then, other creative projects (mostly film scripts and some poetry) interceded until 1998, during which I wrote a 160-page treatment for the tetralogy. After that, naturally my research became more focussed on the times, places, people, and events that had become the backdrop of Arion’s story (and that of Athens) from 445 BC to 427 BC. 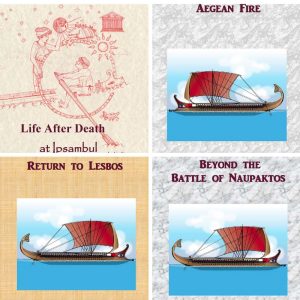 The geography research was relatively easy, though one must take account of changes over the millennia. For example, the Aegean coast is now several miles away from the important seaport of ancient Ephesos due to twenty centuries of alluvial material, which forced closure of the ancient port facilities in the 1500’s; likewise, the narrow strip of beach at Thermopylai, valiantly defended by King Leonidas’ 300 Spartan hoplites against the Persians, is now much broader than it was in 480 BC. Similarly, for historic buildings: for example, the renowned Erechtheion (on Athens’ Akropolis) existed only on paper at the time of my story.

While my research was guided and constrained by my desire to be as historically correct as possible, I also was committed to avoiding any premise of such significance that it would have been recorded given the level of detail in historical records of the time. The author of historical novels must make decisions about many historical things that have not been recorded; the constraints accepted above had to be reasonably intertwined with the fiction of my story, without seeming tedious in consideration of my impulse toward kaleidoscopic expansion in the details of Arion’s Odyssey.

Possibly the most interesting research challenge that I faced, due to the extent that navigation was central to much of Arion’s life, was in my being able to estimate how close to the wind a square-rigged ship could sail. This would affect how long a ship might take on any route, whether it would even set sail at all, or whether it could hope to evade a pirate ship. It was easy to make a decision about lateen rigging, for which the earliest artistic evidence I could find is from the second century AD, which is 600 years after the time of my story. On the other hand, I found it impossible to believe that, much earlier, experienced mariners wishing to steer close to the wind, would not have accidentally discovered the value of occasionally canting the yard of their rectangular sail toward the stem (by hauling forward and down on one brace, and loosing the other brace), thus converting to a canted trapezoidal rig (in which the lower clew would be switched to a more inboard position along the foot of the sail, thus rendering useless only a small triangular portion of the sail, and making the effective portion of the rectangular sail into a tilted trapezoid). This, and other ship issues, involved careful study of portions of ten books about ancient ships and navigation.

Egypt, the setting for a major portion of Volume 1 (Life After Death at Ipsambul), presented its own unique challenge because my Greek protagonist and his father were on a tour of Egypt with an Egyptian tour guide. What a tour guide in 439 BC might have known about Egypt’s architecture and (prior) history then, say, back to the time of Ramses II, would depend on who, if anyone, still read hieroglyphic writing then so that historical records could have been known then that in modern times were shrouded in mystery until Champollion began to succeed in his decipherment of hieroglyphic writing based partly on the Rosetta Stone, which had been discovered by an officer of Napoleon during his expedition to Egypt early in the nineteenth century.

Among the myriad details of Arion’s Odyssey research, equally interesting was learning that wealthy Athenians in summer time could chill their wine by adding snow from the deep ravines of Mt. Olympos. This bit of information affected only one line in a single volume of the tetralogy.

After leaving the aerospace industry in 1995, where he worked as an operations research analyst for nearly two decades, Lin Sten was able to give more attention to his passion for writing. In between film scripts, he wrote the nonfiction Souls, Slavery, and Survival in the Molenotech Age (Paragon House, 1999) and poetry. He completed a treatment for his historical tetralogy Arion’s Odyssey in 1998. After that, he wrote twelve drafts of Arion’s Odyssey between 2000 and 2007, and also wrote and published the Simple Sorcerer’s Illustrated Probability Primer in 2004. During a seven-year hiatus in work on the tetralogy, he wrote and published his science fiction novel Mine (2nd edition) between 2009 and 2011. He resumed work on Arion’s Odyssey in 2014, in conjunction with his editors and artists, and completed its publication in early 2018. He lives on the Pacific coast of the United States where he enjoys bodysurfing and snorkling.

Arion’s Odyssey tetralogy is available on Amazon : Life After Death at Ipsambul, Aegean Fire, Beyond the Battle of Naupaktos and Return to Lesbos. 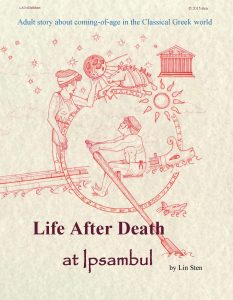 To assist potential readers in making good choices about whether or not to purchase any of the four volumes of Arion’s Odyssey, I offer the following additional information about this tetralogy, which is set in Classical Greece, with the city-state (polis) of Athens as one protagonist and Arion (a human) as the other.

Each volume of Arion’s Odyssey is a combination of historical novel, ancient travelogue, ancient poetry, mythology, religion, and history. If you would enjoy a saga as detailed as Melville’s Moby-Dick, as kaleidoscopic as Michener’s Iberia, and as expansive as Hugo’s Les Miserable, you might love this tetralogy.

Regarding Athens and its empire, the following portion of each novel is similar to an ancient travelogue: one third of Life After Death at Ipsambul (volume 1); one fifth of Aegean Fire (volume 2); one tenth of Beyond the Battle of Naupaktos (volume 3); one tenth of Return to Lesbos (volume 4).

Set in the ancient Mediterranean world, Arion’s Odyssey is an adult story about Arion, a sensitive Greek (boy becoming a man) from a wealthy mercantile family on the Greek island of Lesbos. It begins fourteen years prior to the inception of the Peloponnesian War, and ends during that war: it spans the period from 445 BC to 427 BC.

If you would like to experience life in the ancient Mediterranean world, then you will probably enjoy this adult story about coming-of-age there.

Thanks Lin. I know all about researching a topic for months only to have the result appear in one sentence – or even end up on the cutting room floor. Good luck with Arion’s Odyssey.