Inspiration for the Books 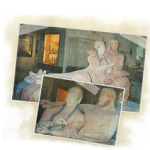 Elisabeth was inspired to write A Tale of Ancient Rome series, after finding a photo of a C6th BC sarcophagus of a husband and wife that she later located in the Louvre. The casket was unusual because, in this period of history, women were rarely commemorated in funerary art let alone a couple depicted in such a pose of affection. The image of the lovers remained with her. What kind of culture exalted marital fidelity while showing such an openly sensuous connection? What ancient society revered women as much as men? Discovering the answer led her to the decadent and mystical Etruscan civilisation and the little known story of the war between Rome and the city of Veii.

Inspiration for the Title of The Wedding Shroud 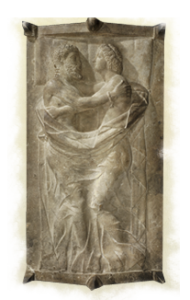 The inspiration for the title of The Wedding Shroud came from Elisabeth discovering another Etruscan sarcophagus from the 4th Century BC with an even more powerful image than the casket of the married couple which inspired her to write the novel. A man and woman lay naked in each others arms beneath a mantle that she came to understand could symbolise the large veil under which an Etruscan bride and groom stood when they took their vows. In effect the husband and wife were swathed in their wedding shroud for eternity in a sensuous embrace; a potent symbol against evil and death that invoked the force of regeneration.