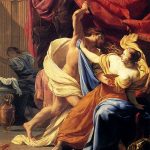 The women of the early Roman Republic were definitely second class citizens (see Damn Whores or God’s Police). It is interesting, though, that two of them, Lucretia and Virginia, were catalysts for significant changes in early Roman history. While the existence of these women is debatable, their legends have been passed down through the ages as examples of the… END_OF_DOCUMENT_TOKEN_TO_BE_REPLACED 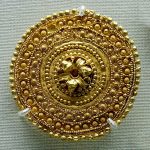 Etruscans loved shiny things. The more glittering and ornate the better. The most stunning examples of jewellery and art came from the era known as the ‘Orientalizing’ period from ca. 720-575BCE. This was a time when Phoenician and Greeks were attracted to Etruria due to its rich metal deposits. The Phoenicians were a sea faring people with extensive trading interests… END_OF_DOCUMENT_TOKEN_TO_BE_REPLACED

One of the main themes of my book is the exploration of the lives of women in the classical period of C5th and 4th BCE through the characters of a Roman girl, Greek slave, Cretan courtesan and Etruscan matron. So what was the status and role of these women in classical times? In both Greece and Rome they were chattels… END_OF_DOCUMENT_TOKEN_TO_BE_REPLACED 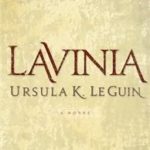 Old fashioned courtesy can go a long way. And so, too, can snail mail. When I requested Ursula Le Guin to endorse my novel I used both. Last year my first novel, The Wedding Shroud, was published in Australia (and has now been released as an e-book world wide). The book is set in C5th BCE at a time when… END_OF_DOCUMENT_TOKEN_TO_BE_REPLACED 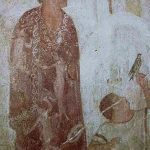 As well as the ability to interpret the future from lightning bolts, the Etruscans also observed the flight of birds for the purposes of divination. The process of interpreting the patterns of flight was known as taking the auspices (literally ‘looking at birds’). As was the case with understanding lightning portents, the sector of the sky where a bird flew… END_OF_DOCUMENT_TOKEN_TO_BE_REPLACED 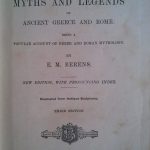 The ancient world has always held a fascination for me. It must be in my genes because one of my fondest memories is that of my father telling me stories about the Greek gods. As a kid, I also found a book in our house that had been handed down from generation to generation within my family entitled The Myths… END_OF_DOCUMENT_TOKEN_TO_BE_REPLACED

‘There was drama to his ministry. When he marked the sacred boundaries with his lituus, carried the patera of water around the altar, she could almost see the lines that divided holy from profane appear.’ The Wedding Shroud To me a violent storm instils fascination and fear. Science tells me what causes it but tell that to my dog who… END_OF_DOCUMENT_TOKEN_TO_BE_REPLACED

I have two obsessions – writing and ancient history. Luckily I was able to combine both while researching and writing my novel, The Wedding Shroud. The novel is set in Etruria, a civilisation that existed in Italy from archaic times and was situated in the area we now know of as Tuscany, Umbria and Lazio but whose influence spread across… END_OF_DOCUMENT_TOKEN_TO_BE_REPLACED