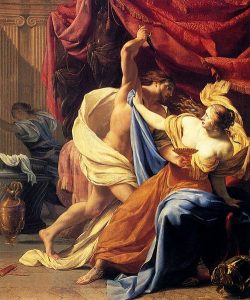 The women of the early Roman Republic were definitely second class citizens (see Damn Whores or God’s Police). It is interesting, though, that two of them, Lucretia and Virginia, were catalysts for significant changes in early Roman history. While the existence of these women is debatable, their legends have been passed down through the ages as examples of the Roman virtues of chastity, modesty and fidelity. Here, in the first of two blog posts, are their stories.
The concept of a ‘blood taint’ is important here. A woman was expected to be chaste if she was a maiden, and faithful if she was a wife. A husband or father was entitled to kill their wife or daughter if she had an affair. They could also kill them if they deemed a woman’s honour had been sullied regardless of whether she was innocent or guilty of the act that may have constituted her ‘corruption’. This covered the spectrum from a girl being discovered alone with a man without a chaperone to the commission of a rape. Once a woman’s sexual purity had been compromised her blood became ‘tainted’.
A woman was also expected to value her honour as can be seen from the story of the rape of Lucretia. Here is her story:
Lucretia was married to the Roman nobleman, Collinatus. When he boasted that his wife was more virtuous than Etruscan wives, Sextus, the son of the Etruscan King, visited Lucretia to test this claim. Holding a sword to her throat, he demanded that she sleep with him.  When she refused, he threatened to not only kill her but also leave the corpse of a naked slave beside her so that Collinatus (and all Rome) would think she had committed adultery with a servant.  To avoid bringing such shame upon her husband, the matron yielded to Sextus. The next day Collinatus discovered the rape and was prepared to forgive Lucretia for her blood taint. Despite his pleas, though, she took her own life rather than live with dishonour.  Her defilement and self sacrifice incited the Romans to rise up and rid Rome of their oppressive and depraved Etruscan rulers by expelling King Tarquinius Superbus. After this, the Romans vowed never again to be governed by a monarch and the Republic of Rome was born.
At the time this crime occurred the last of three Etruscan kings reigned over Rome. Despite the fact that these rulers introduced important political reforms and converted Rome from a village into a great city, the Romans hated them for what they perceived to be their decadence. In particular, Etruscan women were considered sinful and dissolute because of their independence. Hence Collinatus’ boast as to the superior virtues of his Roman wife.
In my novel, The Wedding Shroud, my protagonist, Caecilia, lives in dread of having to live in the debauched Etruscan society. She questions whether or not she should follow Lucretia’s example and kill herself rather than suffer such shame. However when she discovers the pleasures and freedoms of Etruscan women, she begins to grapple with conflicting moralities and realises that Rome’s view of Etruria could well be flawed, and that she might not want to emulate Lucretia after all.

I’m also delighted to announce I’ve released a short story, Dying for Rome: Lucretia’s Tale, which retells the historic story of the tragic girl whose death inspired the men of Rome to rise up against a tyrant king and establish the Roman Republic. Was she a victim or a champion? A pawn in political schemes or the catalyst for rebellion? In this vivid short story, I explore Lucretia’s character to reveal a tender portrait of a young girl misused by men who transforms into a woman with a passion for justice.

Subscribe to my monthly Inspiration and Giveaway newsletter and you will receive a free copy of this 80 page short story.

The image is of a painting of the Rape of Lucretia by the C17th painter, Simon Vouet. The story has been inspiration for numerous C6th and C17th painters such as Raphael, Rubens, Tintoretto and Rembrandt. She is a symbol of virtue and self sacrifice triumphing over corruption .
Share with friends ...