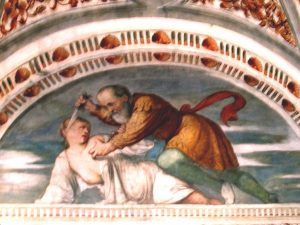 Does this picture look familiar? No, it’s not Lucretia (Dying for Rome) but this woman’s story is depressingly similar to that of the tragic Roman matron who was raped by an Etruscan prince.

She is Virginia, whose death, just like Lucretia’s, was the catalyst for significant change in Rome. The image is deceptive, though, because the man stabbing her is not her rapist but her father.

Once again, Virginia’s existence is debatable but her story is an example of how Roman women were supposed to be paragons of modesty, chastity and fidelity. Accordingly any actual or perceived breach of these virtues entitled their husbands or fathers to kill them because of the resulting stain on them and their family’s reputation.

Virginia’s story is even more tragic than Lucretia’s because she did not get a chance to choose her fate. She was truly a pawn whose death once again stirred the men of Rome to rise up and depose an oppressive government.

She was the daughter of a centurion, Virginius.  The plebeian maiden caught the eye of the patrician judge, Appius Claudius. The judge was one of the ten corrupt Decemvirs (literally ‘ten men’) who had been elected to rule Rome after the Etruscan kings had been booted out after Lucretia killed herself. Whilst Virginius was away, Appius Claudius organized for a friend to bring a court case claiming that Virginia was his slave on the basis that he would then hand the girl over for Claudius to use.  Even though Virginius returned in time to discover the scheme, Claudius, in his role as judge, held that Virginia should be removed from her father’s house anyway.  Not wishing his daughter to be subjected to the shame of being a rich man’s whore, the centurion took a butcher’s knife and slew her.  The outcry that followed led to the reign of the Decemvirs ending. Virginius himself was not condemned as a murderer, though, because he had power of life and death over his daughter.

Women were second class citizens in Rome (Damn Whores and God’s Police) and their rights limited. The paternalism of these stories jars because we see these women only as victims of the ‘system’ rather than active champions of rebellion.

In my novel, The Wedding Shroud, my protagonist, Caecilia, is married to an Etruscan man, Vel Mastarna, to seal a truce between two warring cities. Caecilia, intolerant and self righteous, leaves Rome indoctrinated into believing that she must remain ‘virtuous’. When she comes to Veii she grapples with conflicting moralities as she discovers that the Etruscans offer independence, education and sexual freedom to women. Over time she meets three women from different cultures: a Greek maid, a Cretan courtesan and an Etruscan matron. Through their stories she discovers that there is more to life than the restricted ideals of Rome. Caecilia’s dead father was a plebeian, and so she also wonders if he would have killed her for living among the ‘sinful’ Etruscans just as Virginius did his daughter. And by the end of the novel, she finds herself in a position where she might change Rome’s history just as Lucretia and Virginia before her.

The image is of a painting entitled The Death of Virginia, by the painter Girolamo Romani (Romanino) (c. 1485 – c. 1566) who was an Italian High Renaissance painter. During his long career he decorated the walls of Castello del Buonconsiglio, a castle in Trento, northern Italy. This painting is one of the frescoes that grace that castle’s walls