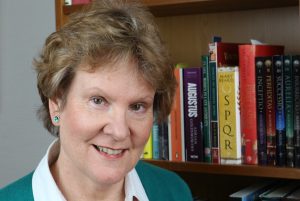 A ‘Roman nut’ since age 11, Alison has misspent decades clambering over Roman sites throughout Europe. She holds an MA History, blogs about Romans and writing.

Now she continues to write thrillers, cultivates a Roman herb garden and drinks wine in France with her husband.

All six Roma Nova full-length novels have been awarded the BRAG Medallion. Successio, Aurelia and Insurrectio were selected as Historical Novel Society’s Indie Editor’s choices.  Aurelia was a finalist in the 2016 HNS Indie award. Successio was selected as an editor’s choice in the Bookseller. Carina is a novella set between Inceptio and Perfiditas.

You can connect with connect with Alison on her Roma Nova site, Facebook author page,  Twitter  @alison_morton, and Goodreads.

You can find links to all Alison’s books on her Amazon page.

Out of the blue, I was asked to contribute to an anthology of alternative history short stories centred on different possible outcomes to the 1066 invasion of England. I’d just finished the sixth novel in my Roma Nova alternative history series and was catching my (writing) breath. 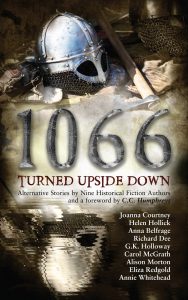 I nearly refused; most of the other authors were medieval or Conquest specialists. What did I know? But as a writer whose fictional world was nothing but alternative history and one who wrote about it in theory and practice, how could I refuse the biggest ‘what it’ in English history? And how wonderful to have an eleventh century Roma Novan female envoy clash with the macho society of William of Normandy? ‘A Roman Intervenes’ in 1066 Turned Upside Down was the result.

But a short story collection of my own? Hm. In the end my curiosity bit me. While writing the full-length novels, I’d always enjoyed giving the characters their own backstory as it rounded them out and illuminated how they became the characters they were. Almost without realising it, the desire to explore incidents in my characters’ lives, delve back into Roma Nova’s earliest days and find out what happened to characters after the main trilogies ended had been gathering strength.

Using that 1066 story as a basis, Roma Nova Extra, became a collection of eight stories covering a historical range from AD 370 to 2029. This presented a time problem in several senses.

Merging past with present 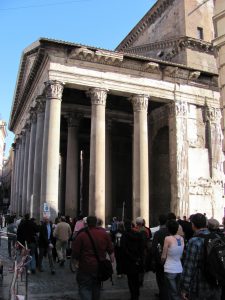 Stories are about people, but people live in places, some of which we will never see. This is the standard historical fiction writer’s dilemma. Checking what buildings were present in what form at a given time is tricky. Over the years, the centuries even, timber hall houses were replaced by stone buildings, castles which started as simple keeps developed into full-blown fortresses, river ports changed from landing stages into stone reinforced quaysides and later extensive docks. Victorian redbrick and urban sprawl followed, with passive and ‘green’ timber frame houses now pointing to the future, but with a strong conservationist streak preserving the past. The opposite is, of course, true as we see in ruins of Roman towns and blighted castles which will eventually fade from the landscape.

Tackling the alternate 1066 project, I needed to carry out a mountain of research. The Roma Nova of my imagination traded with Saxon England but never with Normandy. It was terra incognita for both me and Galla Mitela, my heroine. I spent hours, no, days looking up early transport routes, the landscape of the River Seine (Sequana), the town of Rouen (or Rotomagus as Galla called it) and detailed social, legal and economic dynamics prevailing in most eleventh century European states. And into all that, I had to weave a story of how Galla could possibly have stopped the Norman invasion.

And then the people must speak and act with the values and attitudes of their time. Galla disparages the ‘barbarian’ Northmen whose ‘ancestors were probably eating raw fish in smelly huts when mine ruled the known world’, but she displays wit and guile dealing with them, yet compassion even when ordering an attack where people will die. 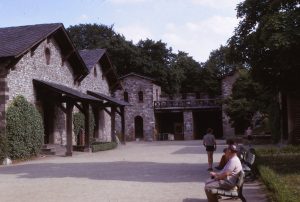 In a story set earlier in AD 370, military tribune Lucius Apulius is posted to a Danube backwater. Tracking his journey from Britannia to Noricum involved horses, mules, wagons, armed escorts, pack animals, wayside inns, and inevitably weather. His six-week journey would take us hours today. Once arrived, his robust attitude is to us in the 21st century, bordering on the quasi-brutal, but like us, he is trying to navigate his place in the world.

Jumping forward to the 1980s isn’t as easy to write as you may think as it’s not ‘modern’; no mobile phones, no Internet, air travel requiring visas and those strange ticket booklets, rampant sexism, smoking, floppy haircuts and shoulder pads. I had the surreal experience of having to track down when plain-paper fax was invented and what handguns security and police forces used before today’s ever-present Glock.

The modern four stories seem easier, even when they hark back to an ancient mystery, but the research to anchor the alternative Roman timeline into 21st century Praetorian’s story needs careful consideration of the social mores descended from traditional Roman values of two thousand years ago. 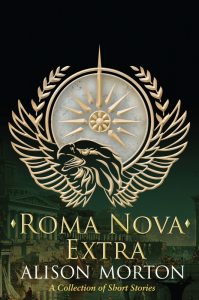 Eight stories – four historical and four present day and a little beyond – but they’re all about the people of Roma Nova.

A young tribune sent to a backwater in 370 AD for practising the wrong religion, his lonely sixty-fifth descendant labours in the 1980s to reconstruct her country, a Roma Novan imperial councillor attempts to stop the Norman invasion of England in 1066, her tough 21st century Praetorian descendant flounders as she searches for her own identity and happiness.

Some are love stories, some are lessons learned, some resolve tensions and unrealistic visions, some are plain adventures, but above all, they are stories of people in dilemmas and conflict, and their courage and effort to resolve them. Oh, and there are a few surprises…

Good luck with Roma Nova Extra, Alison. I’m sure your fans will love the chance to read more about the worlds you so expertly conjure.