Today I have the pleasure of welcoming MK Tod to share the inspiration behind her latest release, Paris in Ruins. M.K. Tod writes and blogs about historical fiction. She can be contacted on Facebook, Twitter and Goodreads or on her website www.mktod.com. You can also enjoy the Paris in Ruins book trailer on Youtube.

MK Tod’s previous novels, Unravelled, Lies Told in Silence, and Time & Regret feature characters caught up in the turmoil of the world wars (you can read her post on writing Time & Regret here.) With Paris in Ruins, she goes back to an earlier conflict. In 1870 Paris, over half the population lived in poverty. Protests seethed beneath the surface and spilled onto the streets in riots and demonstrations. Paris In Ruins takes readers to the time when the Prussian army laid siege to the city and two women risked everything to survive the chaos and destruction.

As I was intrigued to learn more about this era of history. Please enjoy this post by MK on her inspiration to write Paris in Ruins. 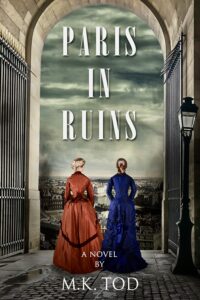 Inspiration comes in many flavours

The Franco-Prussian war occurred in 1870 during the reign of Napoleon III. The French were quickly defeated, and the Prussian army soon surrounded Paris, determined to force the French government to surrender. The siege resulted in thousands of deaths and untold suffering. Tragedy didn’t end there. In the middle of March, radical republicans overthrew the government and established the Paris Commune. For ten weeks, the Commune carried out acts of murder, assassination, pillage, robbery, blasphemy, and terror, until finally expiring in blood and flames.

A perfect setting for a novel!

Writers are not always masters of their own stories. There are editors to please, early readers who help tune the story, husbands and friends who offer suggestions—the list goes on. Each new story begins with a glimmer of an idea, that spark that ultimately leads to a finished novel. The challenge is to feed that spark and breathe life into the fire as the writing process unfolds. For that we need inspiration on an almost daily basis.

As writers we bandy about the word ‘inspiration’ almost as if it were an everyday occurrence. And at times, it is. But at other times, inspiration is as difficult to grasp as a low-hanging cloud. It seems to me there are many levels of inspiration: the overall story concept, the characters who populate the story, the settings where the action takes place, the plotline of who does what to whom and when, and in the case of historical fiction, the real events that shape the story.

Paris In Ruins was inspired by two characters from an earlier novel, Lies Told In Silence. That novel begins in 1914, when a young woman called Helene Noisette leaves Paris along with her mother, grandmother, and younger brother to escape the threat of war by moving to northern France and the fictional town of Beaulieu. Helene’s grandmother, Mariele, is a widow in her mid-sixties, a woman whose past holds tragedy and secrets.

To my delight, readers were taken with Mariele and the role she played in Helene’s coming of age. They wanted to know more about her. What could Mariele’s story be? I pondered this question for a while and eventually asked: What if I went back to a time when Mariele was a young woman to see which historical events might have shaped her life? I did the calculation and landed in 1870. A quick search led me to the Franco-Prussian war, the siege of Paris and the Paris Commune. Wonderful! War, destruction, death, starvation, and a ruthless insurrection – all that drama. Surely, I could cook up something.

A second character threads her way through Lies Told in Silence – Camille Noisette, Mariele’s sister-in-law. Although Camille died before 1914—I have yet to decide the cause of death—she features in that story through the memories of Mariele and through her house, which is located just outside the village of Beaulieu.

Two capable women. A friendship. A siege and an insurrection. Throw in a dash of unscrupulous behavior, some clandestine activities, an element of romance, the desire to protect those you love and to serve your country, and voilà, as the French say.

But what other characters would populate the story? What would their strengths and weaknesses be? Would Mariele and Camille have brothers and sisters? What kind of relationships would they have with their parents? Should I add any real people to the mix? The answer to that last question turned out to be yes—I added Sarah Bernhardt, the famous actress who just happened to turn the Odeon Theatre into a hospital during the siege. All true. I also added Louise Michel, a woman who played an influential role in the formation of the Paris Commune. Louise Michel even enlisted in the National Guard to fight against the French army.

Settings are another element of inspiration. Paris is such an amazing city, full of life and architectural wonders and I was like a kid in a candy store trying to decide where my characters should be. A trip to Paris in 2016 helped me choose many of the settings: Parc Monceau, the Luxembourg Gardens, Montmartre, the church of Sainte-Clotilde, the Odeon Theater, the Pantheon, and Versailles to name a few.

In terms of the history, I narrowed the story so that most of it takes place during the months of siege (September 1870 to January 1871) and the Commune (March through May 1871). These were days marked by deprivation, loss, bombardment, starvation, street-by-street fighting, and death. Needless to say, I researched these months thoroughly and from time to time came across an incident that begged to be part of the story.

It’s a privilege to write historical fiction and find ways to bring history to life. Inspiration may sound like a simple process, but in reality, it’s very hard work.

Many thanks to Elisabeth Storrs for giving me the opportunity to guest post today. Elisabeth and I have never met, but I count her among my friends.

Paris 1870. Raised for a life of parties and servants, Camille and Mariele have much in common, but it takes the horrors of war to bring them together to fight for the city and people they love.

A few weeks after the abdication of Napoleon III, the Prussian army lays siege to Paris. Camille Noisette, the daughter of a wealthy family, volunteers to nurse wounded soldiers and agrees to spy on a group of radicals plotting to overthrow the French government. Her future sister-in-law, Mariele de Crécy, is appalled by the gaps between rich and poor. She volunteers to look after destitute children whose families can barely afford to eat.

Somehow, Camille and Mariele must find the courage and strength to endure months of devastating siege, bloody civil war, and great personal risk. Through it all, an unexpected friendship grows between the two women, as they face the destruction of Paris and discover that in war women have as much to fight for as men.

War has a way of teaching lessons—if only Camille and Mariele can survive long enough to learn them.

A meticulously researched novel about an almost forgotten war in which the newly assertive Prussians brought the French empire to its knees—a dress rehearsal for the two World Wars. In the 1870s women were far from the vote but were still very active in the war efforts. The story of two women whose families were caught up in the defense of Paris is deeply moving and suspenseful ~~ Margaret George, author of Splendor Before the Dark: A Novel of the Emperor Nero

PARIS IN RUINS  is available at AmazonUS, AmazonCanada, Kobo and Barnes & Noble.

Thanks  so much, Mary, for the terrific background into your new book and its history. I also love the fact a Canadian and Australian can share friendship across the years and the ether!