Happy 2019! My first interview this year is with Deborah Swift who is one of a team of bestselling WWII historical fiction authors. Their anthology, The Darkest Hour, includes ten never before published novellas exploring the theme of ‘resistance’ during WWII. 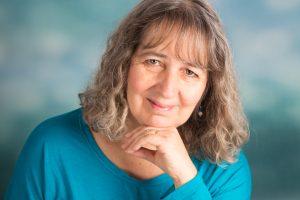 Deborah Swift used to be a set and costume designer for theatre and TV, during which time she developed a love of research which fuelled her passion for the past. She holds an MA in Creative Writing from Lancaster University and also writes successful seventeenth century historicals. Her WW2 novel Past Encounters was a BookViral Readers Award Finalist for WW2 fiction. You can connect with Deborah via her website, Twitter @swiftstory or follow her on Amazon.

You can purchase The Darkest Hour here. ***All proceeds will be donated to the United States Holocaust Memorial Museum In Washington DC.***

Like so many other authors, I have always loved reading and devoured stories when I was a child. At school I always loved those assignments like ‘What I did on my holidays’, but I used to spice them up with extra things the family didn’t actually do. To me, this didn’t seem like lying, but giving the teacher a more interesting story. Heaven only knows what the teacher thought my family was like, with holidays that included escaped convicts, secrets in attics, and dogs we didn’t possess! (And yes, I was heavily influenced by children’s versions of Dickens, Charlotte Bronte, and Enid Blyton.) Nowadays I still read widely, but enjoy books by Geraldine Brooks, Rose Tremain, Kristin Hannah, and Kate Atkinson. 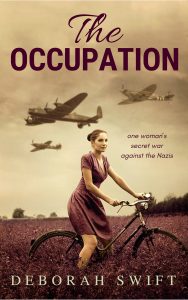 I’m currently collaborating with nine other authors on the anthology of novellas; The Darkest Hour. My novella, The Occupation, takes place on the island of Jersey during German Occupation in WW2. I’ve always been fascinated by stories of resistance, and read a newspaper article about a jerseywoman who hid her Jewish friend to prevent her deportation to a concentration camp. So my story is based on a true one. My protagonist Celine, like in the true story, is married to a German who has been conscripted against his will into the German army. I wanted to explore the different tensions that grew from her courage.

Jersey is a British territory, and being a Brit, it was interesting to research the effect of the occupation on the islanders. I suppose because it was so close to home, and gave a terrifying idea of how I might react if my town was suddenly taken over by an alien force. In another way, I wanted to explore the idea of ‘occupation’ itself, a large task for a short novella, but one I thought was important in this world of shifting migration.

Many periods of history inspire me, and I have a hard time choosing which to go for every time I start a new novel. I have two main strands at the moment; the 17th Century and WW2. That probably seems strange – there are quite a few centuries between them! But for me these periods have enduring appeal because the effect they wrought on public and private life in the UK and US is still very visible. The 17th Century is a great time of political and religious upheaval, and a time of global expansion. WW2 reminds us of what is worth defending, and completely changed the role of women in society. I am particularly interested in how people resist oppression in whatever form it takes. 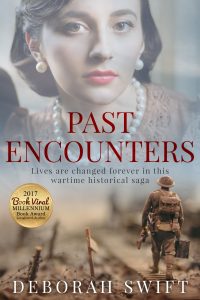 For my WW2 books I use original newspapers of the time, letters, and interviews. Eyewitness accounts are possible, and often my problem is not lack of material, but too much of it. A lot of sifting has to go on to pull out the best nuggets of information. Many WW2 accounts and letters, though poignant, are very dry and factual. They were not designed to be read as fiction, so the author has to invest them with life by looking at photographs, and adding the small details that bring the scene to life. A novel takes me a year to write, often more, as historical fiction is heavy on the research, and I like to build books to last – books that you can read more than once and see different aspects or depths to the story.

I don’t use Scrivener or any software except Word. I do write in longhand occasionally if I’m ‘on location’ doing research, or interviewing someone. I jot a lot of notes about setting, or snippets of conversation. My WW2 novel Past Encounters is set in my home town, so I interviewed a lot of people about their memories of the film ‘Brief Encounter’ that took place there in 1945. 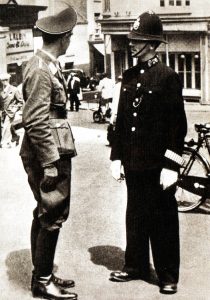 For my story, The Occupation, this photo really struck me. The British ‘Bobby’ or Policeman, talking to a German officer on the streets of Jersey. The British policeman in those days symbolized order, justice and trustworthiness. The German officer wanted to impose the Nazi idea of ‘order’ which included ‘cleansing’ the streets of what they called ‘undesirables’ – Jews, communists, political activists and anyone who opposed their views.

A word first about the other stories in the Anthology – they are all different, set in different places around the globe, and each author has produced their own take on the theme of ‘Resistance.’ I was really impressed with the quality of all the stories, and you can find out more about each of these gripping novellas here.

Meanwhile, to go alongside The Occupation, I am working on the story of Celine’s husband, Siegfried (Fred), and how it felt for him when he was conscripted into the German army, first to occupy France, then at the Russian Front. The two novellas will fit together to make a complete picture, though both will stand alone as separate stories. 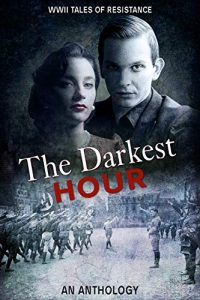 WW2. When the world falls to terror and tyranny reigns……how far would you go to resist?
Would you risk your own life or the lives of the ones you love?

From a young Jewish woman in love fighting her way out of the Warsaw ghetto, to a Czech assassin rising above his fears for an attempt on a Nazi Hangman’s life, to a daughter who vows to avenge her family by taking down a Japanese commander, and a French boy’s touching act of defiance no matter how small.

Come and get a glimpse of the invisible side of WWII – the Resistance, those who refuse to bow down to brutality.

Hold your breath and hope for the best in the darkest of times, when our heroes and heroines risk all to defy evil so the light of freedom will shine over their countries again. 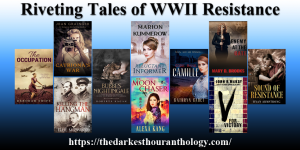 Thanks Deborah – what a terrific project and such a good cause. Congratulations to all the authors!