My special guest today on Triclinium is E M Powell, author of the Fifth Knight medieval thriller series. Born and raised in the Republic of Ireland into the family of Michael Collins (the legendary revolutionary and founder of the Irish Free State), she now lives in northwest England with her husband, daughter and a Facebook-friendly dog. She is also a contributing editor to International Thriller Writers The Big Thrill magazine, blogs for English Historical Fiction Authors and is the social media manager for the Historical Novel Society. The Fifth Knight and The Blood of the Fifth Knight have been #1 Amazon bestsellers and a Bild bestseller in Germany. Book #3 in the series, The Lord of Ireland, was released in 2016. 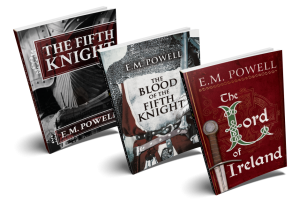 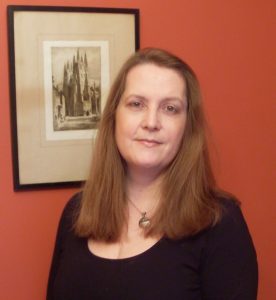 I was writer for pretty much as long as I can remember. As for being a published writer, that was a bit harder to achieve! Here’s the long story short. I had won a number of writing prizes at school and had been encouraged by the career guidance nun to pursue a career in writing. (Yes, career guidance nun. I went to a convent school in Ireland and the sisters were very ahead of their time. Proper psychometric testing and everything.) Family didn’t agree. I was moaning about all this to long-suffering Spouse two decades later. He told me to go and write a novel. So I did. It was a 120,000 page contemporary thriller with romantic elements. And it was utter drivel. It got rejected by agents and publishers many, many times. It languishes in an electronic drawer to this day. They say ‘write what you know’ and I’d always loved historical thrillers, so that was attempt #2. It’s also in the drawer. #3 got me there, albeit ten years from the birth of The Drivel. If I had to choose a favourite author in that genre (historical thriller, not drive), it would be Robert Harris’s Pompeii. Simply wonderful on all counts- historical and thriller.

My best-selling medieval thriller Fifth Knight series is set in twelfth century England. The first book was based on the infamous murder of Archbishop Thomas Becket in Canterbury Cathedral in 1170. History tells us that four knights carried out the brutal murder but I added a fictional fifth, Sir Benedict Palmer. In book #2, The Blood of the Fifth Knight, somebody is trying to murder the fair Rosamund, mistress of Henry II. Palmer is called back to the service of his king once more.

In book #3 in the series, The Lord of Ireland, which is my current release, Palmer travels to medieval Ireland in the service of John, future Bad King John and youngest son of Henry II. The Ireland of 1185 was at the very start of the Anglo-Norman conquest of the country. For me, being Irish, it was extra special to delve into the history of the land of my birth. There were a number of warring factions as well as the invaders, so I had to make sure I got that right.

I think that the medieval period is one of the most interesting, exciting and downright bizarre historical periods of all. It isn’t the most popular for readers of historical fiction, but I think people are missing out. What other period gives you banquets that serve peacocks, breath-taking illuminated manuscripts, gatherings with the Devil, leech collectors and chainmail?

I had the best time researching The Lord of Ireland as it meant I had the excuse to retrace John’s journey through Waterford, Kilkenny and Tipperary visiting so many castles and sites that still exist. As for other resources, they say a picture is worth a thousand words. Here’s just some of the research pile. Can we summarise by saying a lot?! It took just over a year to complete. 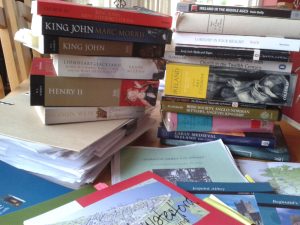 My most precious object is J.I. Rodale’s The Synonym Finder. It has never let me down in 15 years.

To get into the head and heart of my characters, I use online personality questionnaires, answering them as if I were the character. For the future King John, I used one for Narcissistic Personality Disorder as the 18 year old John. It worked a treat!

I have only just taken the jump into Scrivener for my latest WIP. It took a bit of getting used to as I had previously always written in Word. But now that I know what I’m doing (ish), it’s amazing. I don’t ever write longhand, but I make notes longhand. I have to print off a MS for editing. Reading on a screen only just doesn’t do it. 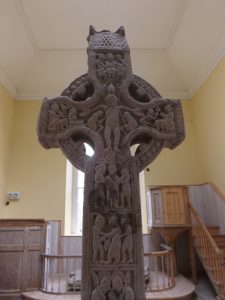 It’s one of my research photos. One of the major characters in The Lord of Ireland is Hugh de Lacy, Henry’s first Lord of Meath. As well as touring the magnificent Trim Castle in Co. Meath, I visited the site of one his motte and bailey castles at Durrow in present day Co. Offaly. De Lacy’s mark on the land is no more. But the magnificent ninth century High Cross of Saint Colmcille still stands there, as it had done so 300 years before any Anglo-Norman’s arrival. This was the point where it hit home that I had an extra layer of history. Yes, I was tracking the events of 800 years ago. But those boots of the Norman invaders were already tramping through history, through a land that had its unique ancient past.

Never, ever give up! Ever. Here’s another photo that might help convince. This is my rejections folder and I have many more stored electronically. Every single sheet in there is a no. It only took one yes. 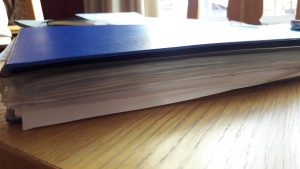 I’m really excited by my WIP. It’s not another Fifth Knight novel, but a spin off that launches a whole new medieval crime series. It’s headed up by Hugo Stanton, the young messenger from The Blood of the Fifth Knight. He’s now working for one of Henry II’s newly appointed judges, who travel the country hearing cases of serious felonies, including arson, robbery—and murder. 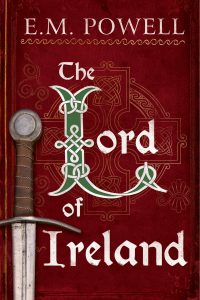 England, 1185. John is a prince without prospect of a crown. As the youngest son of Henry II, he has long borne the hated nickname ‘Lackland’. When warring tribes and an ambitious Anglo-Norman lord threaten Henry’s reign in Ireland, John believes his time has finally come. Henry is dispatching him there with a mighty force to impose order.

Yet it is a thwarted young man who arrives on the troubled isle. John has not been granted its kingship—he is merely the Lord of Ireland, destined never to escape his father’s shadow. Unknown to John, Henry has also sent his right-hand man, Sir Benedict Palmer, to root out the traitors he fears are working to steal the land from him.

But Palmer is horrified when John disregards Henry’s orders and embarks on a campaign of bloodshed that could destroy the kingdom. Now Palmer has to battle the increasingly powerful Lord of Ireland. Power, in John’s hands, is a murderous force—and he is only just beginning to wield it.

You can buy The Lord of Ireland and the other two books in The Fifth Knight series on here.

Many thanks for sharing your sources of inspiration with us, Elaine. Looking forward to seeing your next book released!