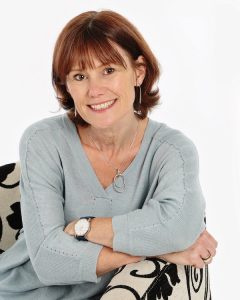 Let’s welcome Imogen Clark who writes fiction set in the 1970s and 80s about the secrets that hide at the heart of the families she creates. Her first book Postcards From a Stranger was independently published last summer. However, it was quickly spotted by Lake Union and she was then offered a three book publishing deal. Postcards From a Stranger will be republished on 7th August 2018 and The Thing about Clare on 1st December with the third book coming out in 2019.

Imogen initially qualified as a lawyer but after leaving her legal career behind to care for her four children, she returned to her first love – books. She went back to University, studying part-time whilst the children were at school and graduated with a BA in English Literature with First Class Honours.

The inspiration to write a novel came to me in a dream about ten years ago. I saw myself writing and when I woke up I thought I would have a go. I’ve always been a reader but until that night I had never thought about actually writing a book other than in that daydream kind of way that most people think about it.

I write stories about families and love books by Maggie O’Farrell and Kate Atkinson. A quirky narrator appeals to me as well as an usual turn of phrase.

I am a stay-at-home mum with four children having given up my career as a lawyer to look after them. Being at home turned out to be far harder than going to an office (who knew?!) and one day I was at the end of my tether. There is a local airport not far from my house and I thought quite seriously about just taking my passport and catching the first available flight to somewhere else to see if anyone noticed that I’d gone. 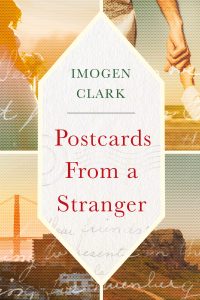 Of course, I didn’t do it but it started me thinking about what might drive a mother to leave her children. There has always been a bit of a taboo when a mother leaves, as if her going is somehow worse that a father doing the same thing. However, society can be quick to judge and I wanted to explore what kind of situation might arise that would make a mother leave and how that might impact on the rest of the family. That’s what Postcards From a Stranger is all about.

Most of my stories are set partly in the 70s and 80s because that’s when I was a teenager and I feel at home there. I hadn’t really thought of that as an historical period as such but now that its 40 plus years ago and has its own sub-culture, I’m beginning to think that it might be. I would also like to write something set in the 1950s but I’m waiting for that story to come to me.

Google! What did we do before Google? But also I use my community on Facebook if I can’t remember how something was and there is nothing like actually going to a place to get a feel for it. Postcards From a Stranger is set in Ilkley where I live and San Francisco which I visited with my family so that wasn’t too tricky. I also found some fabulous decade scrapbooks which are great. I think they are to help people suffering from dementia to look at familiar things from their past and the pages are filled with photographs of food packaging, magazines, cars and other everyday items from the decade in question. They are fascinating just to look at but also a fantastic resource for the writer.

It generally takes me between three and six months to finish a novel but three quarters of the way through my brain starts to buzz with ideas for the next one and I have to really concentrate on the matter in hand to get it completed.

Drive myself mad! I know it will come to me eventually but it is so frustrating whilst you wait. I have a paper thesaurus which can sometimes help but often I just use a different phrase and hope that the one I’m searching for comes back to me. My editor sometimes finds that I’ve used words that sound a bit like the correct one that I’ve typed in to try and trigger the old grey cells and then have forgotten to change. Sometimes they are quite funny! 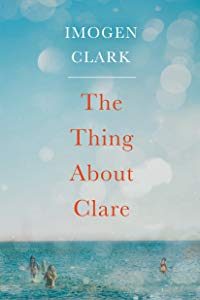 I’m not sure that it’s that unusual but I can’t make a plan or write an outline. I have tried but it’s like my brain goes into a sulk when I ask it to focus on one thing. My best ideas come when I’m doing something else other than just thinking. Often that’s when I’m writing (which is great) but sometimes I can be listening to radio show or cleaning my bathroom and thinking about what to cook for tea. It’s an exciting way to work but it’s not ideal as it means that I’m never entirely sure what the book will be about until I get to the end.

I use Scrivener (although I think I barely touch the surface of what its capable of.) I like being able to easily break my work down into chapters so I can move them around and the colour coding is fab! I don’t write longhand although of course I have hundreds of beautiful notebooks that I buy for that purpose and never use. I would love to keep gorgeous handwritten bullet journals too but I lack the artistic talent. I do write a diary though and that is longhand (and consequently fairly illegible.) 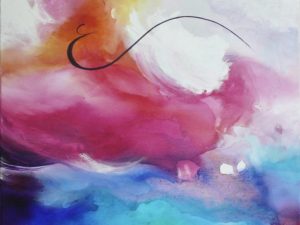 Earlier this year I snatched back a little room in my house to use as a writing room and redecorated it. I was very inspired by the art of a local artist Kerry Stoker and decide to commission a painting for my new space. I was delighted with the result, Future Perfect and it hangs against a dark blue wall in pride of place in my writing room. Here it is on Kerry’s site. Kerry and I talked about my writing process, my inability to plan etc and I think the picture reflects that whilst also giving the impression of something being formed. I love the colours too and when I look at it, particularly when I’m struggling with something that I’m working on, it reminds me just to go with the flow and see where it takes me.

Don’t give up! I had written seven novels before I wrote one that I thought was good enough to show the world. People kept telling me to send them out to see what happened but I knew in my heart that it was too soon. So I just kept putting the books away and starting again until I finally wrote something that I thought might be right. If I’d stopped at that first book I don’t think I’d be where I am now.

My next book is The Thing about Clare which is due out on 1st December. It’s about four siblings and its themes are around what it’s like to have a favourite child and whether it’s nature or nurture that forms your personality.

I have also just finished the first draft of the one after that, as yet untitled but due out in 2019. That one is about two families who have more in common that they realise but I can’t say more than that without giving too much away.

A secret lies buried at the heart of her family—but it can’t stay hidden forever.

When Cara stumbles across a stash of old postcards in the attic, their contents make her question everything she thought she knew.

The story she pieces together is confusing and unsettling, and appears to have been patched over with lies. But who can tell her the truth? With her father sinking into Alzheimer’s and her brother reluctant to help, it seems Cara will never find the answers to her questions. One thing is clear, though: someone knows more than they’re letting on.

Torn between loyalty to her family and dread of what she might find, Cara digs into the early years of her parents’ troubled marriage, hunting down long-lost relatives who might help unravel the mystery. But the picture that begins to emerge is not at all the one she’d expected—because as she soon discovers, lies have a habit of multiplying . . .

Many thanks Imogen. Good luck with the release of Postcards from a Stranger.

Imogen’s books are available for pre-order via her Amazon pages in the UK, US and Australia.