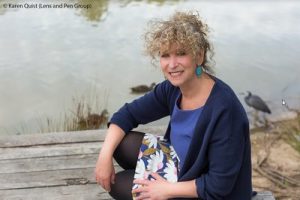 My guest today is Leah Kaminsky, an Australian physician and award-winning writer. Leah’s debut novel The Waiting Room won the prestigious Voss Literary Prize (Vintage Australia 2015, Harper Perennial US 2016). We’re all Going to Die has been described as ‘a joyful book about death’ (Harper Collins, 2016). She edited Writer MD (Knopf US, starred on Booklist) and co-authored Cracking the Code (Vintage 2015). Stitching Things Together was a finalist in the Anne Elder Award. The Hollow Bones is her most recent release  (Vintage Australia 2019). She holds an MFA in Writing from Vermont College of Fine Arts.

I was particularly interested to learn about Leah’s new book about SS Captain Ernst Schäfer’s Tibetan expedition given my own WIP deals with Nazi archaeologists who compromised their principles to subvert science and provide a justification for genocide. Their theories were bizarre and dangerous. Clearly Nazi zoologists were also involved in similar Faustian Bargains. The Hollow Bones sounds right up my ally!

I wrote my first poem in grade 3 (thanks Miss Elisabeth Weeks!) I loved reading as a child, and although I’ve always been pretty eclectic in my tastes, I devoured the classics. There are so many books that have stayed with me, long after I finished reading them. Some of my favourite contemporary authors are Anne Enright, David Grossman, Cormac McCarthy, Kazuo Ishiguro, Anne Michaels and Anthony Doerr. Australia has some fine writers, too many to name, but I’ve enjoyed recent books by Bram Presser, Melanie Cheng, Lee Kofman Alice Nelson, Tracy Sorenson and Emma Viskic. 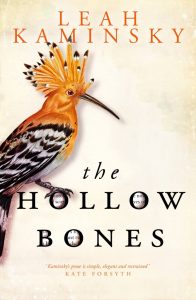 I was drawn into the story of Ernst Schäfer, a young German zoologist and explorer, who rose up the ranks of the SS. When he was invited by Himmler to lead an expedition of German scientists to Tibet in 1938, on a whacky secret mission to explore the origins of the Aryan race, he struck a Faustian bargain in order to further his career. As a doctor with a background in science, the morality of scientists during wartime fascinates me and I felt a moral imperative to examine what happens when science gets into bed with politics.

UK novelist Rachel Seiffert once tole me that ‘WWII is the war that keeps on giving.’ Although I tell myself that my next book won’t be thematically centred around the impact of war on ordinary people, I keep coming back to this era from different angles. I am the daughter of a Holocaust survivor, so I think I feel a moral imperative to bear witness to these events in my writing.

The Hollow Bones took 5 years to research and write. I read everything I could get my hands on about Tibet and Germany of the 1930s and painstakingly translated many documents such as letters and field diaries from the original German. I came across many of Schäfer’s papers and photographs in the library at the Academy of Natural Sciences in Philadelphia and was fortunate to gain access to film footage from the expedition. I was also shown hundreds of specimens brought back from Schäfer’s previous expeditions, including a juvenile panda he shot in 1932, which is now housed in the museum’s diorama. Panda became an important character in the novel.

If I can’t find a fresh way of writing about something, I turn to poetry. When I’m working on a specific project I always have a few volumes of my favourite poets scattered around my desk. Poetry distils the essence of things, and the language is fresh and often surprising. Poetry can describe something in a way you had never before considered. It takes my breath away when I discover the truth that words can hold.

Although fiction and poetry are my truest love, I am ‘genre fluid’, and have written non-fiction books, essays, book reviews and newspaper articles. I love magic realism and often find touches of it creeping into my fiction, especially in The Hollow Bones.

I’m a technophobe by nature. I think I might be the last human to write the entire first draft of a novel in longhand. I have a favourite type of pen (black Classic Fine Bic) and a stack of recycled paper notebooks and I fill them with my scribbles. As I move forward I transcribe my draft onto a word document, editing as I type. It’s messy and cumbersome, but something magical lies in the process of writing directly onto the page 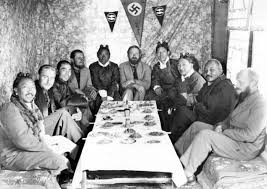 This is a photo from the 1938 German Tibet expedition in which Ernst Schäfer is paying court to Tibetan dignitaries to try and curry favour so they will allow him to enter the holy city of Lhasa, which was off limits to foreigners back then. He has hung flags of the SS insignia and the swastika, telling his visitors that ‘East and West meet in the swastika’. This is one of hundreds of photographs that brought the expedition to life for me and helped me write The Hollow Bones.

I also love Yosl Bergner’s whimsical artwork in which everyday objects are infused with an eerie lifeforce. 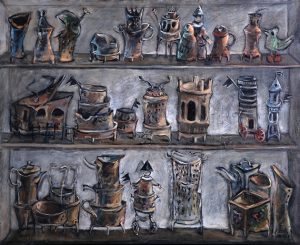 Read. Read more. Read as much as you can. Devour books. This will help you find the rhythm and cadence of your own voice and feel how it sits within the rise and fall of literature. Writers are a chorus of observers, singing their own version of the world into words. Persist. Write for the love of language and its power to transform yourself, as well as others. Publishing is the business of writing; try not to let it blur the beautiful experience of watching words fall onto the page.

My next book will be published in 2020 and is a braided creative non-fiction work about an eccentric Yiddish poet, Melekh Ravitch, who came to Australia in 1933 to try and find a safe haven for German Jewish refugees. My father was friends with his son, Yosl Bergner, who went on to become a well-known painter and colleague of Albert Tucker and Arthur Boyd. It’s a strange historical tale. I’m working on another novel too, which is about dolls, but will keep that under wraps for now as the idea is not fully formed.

‘I remember you once told me about mockingbirds and their special talents for mimicry. They steal the songs from others, you said. I want to ask you this: how were our own songs stolen from us, the notes dispersed, while our faces were turned away?’

Berlin, 1936. Ernst Schäfer, a young, ambitious zoologist and keen hunter and collector, has come to the attention of Heinrich Himmler, who invites him to lead a group of SS scientists to the frozen mountains of Tibet. Their secret mission: to search for the origins of the Aryan race. Ernst has doubts initially, but soon seizes the opportunity to rise through the ranks of the Third Reich.

While Ernst prepares for the trip, he marries Herta, his childhood sweetheart. But Herta, a flautist who refuses to play from the songbook of womanhood and marriage under the Reich, grows increasingly suspicious of Ernst and his expedition.

When Ernst and his colleagues finally leave Germany in 1938, they realise the world has its eyes fixed on the horror they have left behind in their homeland.

A lyrical and poignant cautionary tale, The Hollow Bones brings to life one of the Nazi regime’s little-known villains through the eyes of the animals he destroyed and the wife he undermined in the name of science and cold ambition.

Thanks Leah – good luck with The Hollow Bones and your next project.