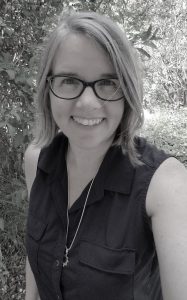 My first guest of 2020 is the wonderful Sarah Woodbury. With over a million books sold to date, Sarah is the author of more than forty novels, all set in medieval Wales. Although an anthropologist by training, and then a full-time homeschooling mom for twenty years, she began writing fiction when the stories in her head overflowed and demanded that she let them out. While her ancestry is Welsh, she only visited Wales for the first time at university.  She has been in love with the country, language, and people ever since. She even convinced her husband to give all four of their children Welsh names. Sarah is a member of the Historical Novelists Fiction Cooperative (HFAC), the Historical Novel Society (HNS), and Novelists, Inc. (NINC). She makes her home in Oregon.

You can buy Sarah’s extraordinary list of books on Amazon.

I wrote my first novel just to see if I could. It involved elves and orcs and magic stones. Basically, it was Lord of the Rings fan fiction. I’m actually not a huge fantasy reader normally, but my children always have been, and I was looking to connect with them. That book will never see the light of day. Fortunately the next books were better 😊

I am a really eclectic reader. Growing up, I read a book a day, delving into everything from historical fiction to science fiction to mysteries to romance. Ellis Peters and Parke Godwin have probably been my greatest influences in regards to my own writing of historical fiction. 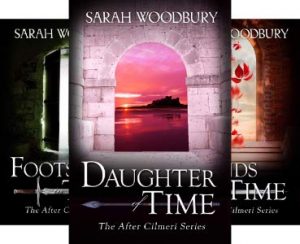 My most recent book is called, Crouchback, and it is the first book in a new series called The Welsh Guard Mysteries. It is set in 1284 Caernarfon, Wales, after the Edwardian Conquest. It was a dark time in history for the Welsh, and I wanted to delve into what it might have been like to live in that time—not only as a Welsh person, but as English or Norman as well.

Ever since I visited Wales for the first time at the age of 20, I have been in love with the people and their history. When I learned that the last native Prince of Wales, Llywelyn ap Gruffydd, had been assassinated by the English in 1282, I began delving into that time period. I read everything I could find, both fiction and non-fiction about medieval Wales, and all my books are set in that era.

Heaven’s no! If I had to write long hand, I probably wouldn’t be a writer. The only thing I write longhand is the notes for each book, which before I start writing tend to be four scribbled pages. After thirteen years of writing, I have four or five notebooks full of notes like that.

For my novels, I am very linear, and I write in Microsoft Word, starting at Chapter One and continue on until I get to the end. I also write drafts, and most books go through at last ten if not fifteen before they are published. 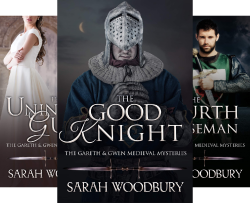 Above all, focus on the writing. Sit down every day and plow ahead, with whatever word count goal you choose.  And as you write, don’t think about the fact that you’ve never written anything longer than a twenty page paper and that was for a class you hated in college.  Today, even if what you put on the page is terrible, no-good, the worst chapter ever inflicted on a word processing program, believe that through editing, educating yourself, and reading what other people write and say about writing, you can learn and improve.  You can get better day by day—until one day you read over the two pages you managed to write the day before and think to yourself, ‘hey, that’s pretty good!’

Don’t think about publishing either.  It isn’t that you can’t publish that first or second book, but that it can’t drive the work—the publishing experience is too frustrating, with too little compensation—for that to be a significant motivation.  It’s only after you’ve written a book, revised it fifteen times, shown it to a few people you trust who have given you feedback, and then revised it several more times, that a novel is ready for public consumption.

I am currently working on the next book in the After Cilmeri series, a time-travel/alternate universe series set in medieval Wales. 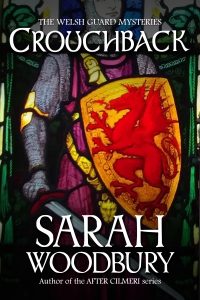 April 1284. As a newly widowed lady-in-waiting to the very pregnant Queen Eleanor of England, Catrin never expected to return to Wales again. She was definitely unprepared to be confronted with murder when she got there–or to find herself face-to-face with Rhys, the childhood friend she lost twenty years before. Rhys had never intended to return home either, but a lifetime of war has deposited him right back where he started–impoverished and owing service to Catrin’s older brother.

With Wales fallen irrevocably to England and not knowing whom else they can trust, Catrin and Rhys join forces against the treachery and intrigue rife within the half-built Caernarfon Castle. And when the killer strikes again, this time within the royal court, the pair race to uncover his identity before he touches the king himself–or his infant son.

Crouchback is the first book in The Welsh Guard Mysteries. You can buy it on Amazon.

Thanks Sarah. You are inspirational. An example of keeping your head down and writing. More than 40 books is a testament to your perseverance and talent.

You can read more about the history behind Crouchback in Sarah’s essay on HFeBooks.