Please welcome Stephanie Thornton as my guest today. She is a writer and history teacher who has been obsessed with infamous women from ancient history since she was twelve. She lives with her husband and daughter in Alaska, where she is at work on her next novel. I’m delighted she’s agreed to be interviewed given our shared love of ancient times. You can connect with Stephanie via her Facebook, Twitter, and her website . 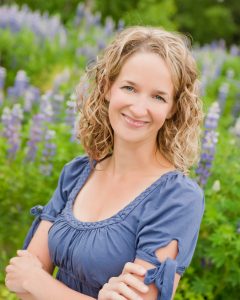 Most people have never heard of Hatshepsut, but her story is so amazing—she usurped Egypt’s throne from her stepson, ushered in the New Kingdom’s golden age, and was almost wiped from history—that I became obsessed with her story and simply couldn’t get it out of my mind until I’d written the whole thing down in the form of a 400-page novel. From there I’ve found myself drawn to other women forgotten by history: Empress Theodora, Genghis Khan’s wife Borte, and Alexander the Great’s women. I’ve been a bookworm since before I could read, but I’d say Thomas Hardy, the Bronte sisters, and Margaret George have been big influences.

My fifth book is in the revision process and was inspired by my love for Theodore Roosevelt. There wasn’t a particular theme I wanted to explore, aside from how amazing the Roosevelts were! 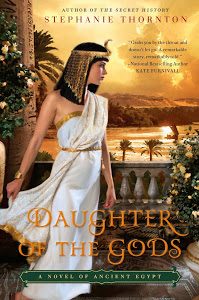 There’s a whole lot of history to love, but I’ve been a huge fan of ancient Egypt probably since around 1st grade. Those pyramids and mummies sunk their claws into my imagination and haven’t let go since. And just when people say everything there has been discovered, archaeologists go and find something new, like Hatshepsut’s mummy or a possible hidden chamber in King Tut’s tomb!

I typically start with a biography, which I write all over to highlight main plot points and character development. From there I’ll branch out into other non-fiction texts and primary sources to try to pepper them into the novel. When I’m really lucky, I get to travel to locations in the book, which I’ve done for The Secret History, Daughter of the Gods, and my current work in progress. Getting to visit Egypt, Istanbul, and Washington D.C. in the name of research is one of the best perks of the entire writing gig! 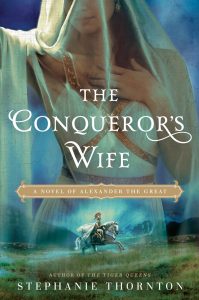 I can’t live without Google and my thesaurus! Sometimes I’ll even write words down when I come across particularly great ones while reading or teaching, just so I can sprinkle them into my own stories.

My daughter has made cameos in pretty much all of my novels. As luck would have it, my protagonists have had daughters in real life, so many of the scenes are drawn from moments with my daughter, everything from Hatshepsut’s pet name for her daughter in Daughter of the Gods, to Alaqai tucking her feet under Borte’s legs while cuddling in The Tiger Queens. In fact, you can almost trace my daughter growing up through the order my books have been published! 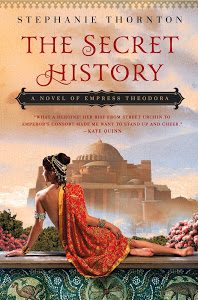 No to Scrivener, but I have written a couple books mostly in longhand before typing the out. Part of that comes from traveling; I don’t lug my laptop around on international trips, but I’m not willing to give up flight time as writing time. I’m incredibly productive on airplanes!

I’ve always adored Gustav Klimt’s work, and especially his Beethoven Frieze/This Kiss for the Whole World. I had the opportunity to see some of his work in Venice, and it was incredibly inspiring.

Gustav Klimt, This Kiss for the Whole World

My go-to advice anytime I’m stuck while writing is Winston Churchill’s famous phrase, “Never, never, never give up!” If life throws obstacles your way, especially when you’re trying to birth a book, try to think of them as tests to prove how much you really want to finish that novel or see it published, instead of hurdles you have to overcome. And just keep writing!

I’ve left the ancient world behind for now and have jumped to 20th century America. It’s been a big adjustment writing about obscure women from thousands of years ago to a family whose every sneeze was reported in the papers, but I’m really loving the change of scenery! 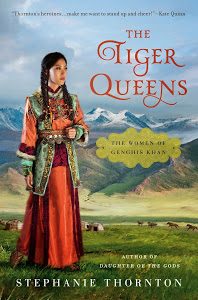 In the late twelfth century, across the sweeping Mongolian grasslands, brilliant, charismatic Temujin ascends to power, declaring himself the Great, or Genghis, Khan. But it is the women who stand beside him who ensure his triumph….

After her mother foretells an ominous future for her, gifted Borte becomes an outsider within her clan. When she seeks comfort in the arms of aristocratic traveler Jamuka, she discovers he is the blood brother of Temujin, the man who agreed to marry her and then abandoned her long before they could wed.

Temujin will return and make Borte his queen, yet it will take many women to safeguard his fragile new kingdom. Their daughter, the fierce Alaqai, will ride and shoot an arrow as well as any man. Fatima, an elegant Persian captive, will transform her desire for revenge into an unbreakable loyalty. And Sorkhokhtani, a demure widow, will position her sons to inherit the empire when it begins to fracture from within.

In a world lit by fire and ruled by the sword, the tiger queens of Genghis Khan come to depend on one another as they fight and love, scheme and sacrifice, all for the good of their family…and the greatness of the People of the Felt Walls.

Many thanks for sharing your sources of inspiration, Stephanie.

You can buy Stephanie’s books via these links: The Conqueror’s Wife, Daughter of the Gods, The Secret History and The Tiger Queens.