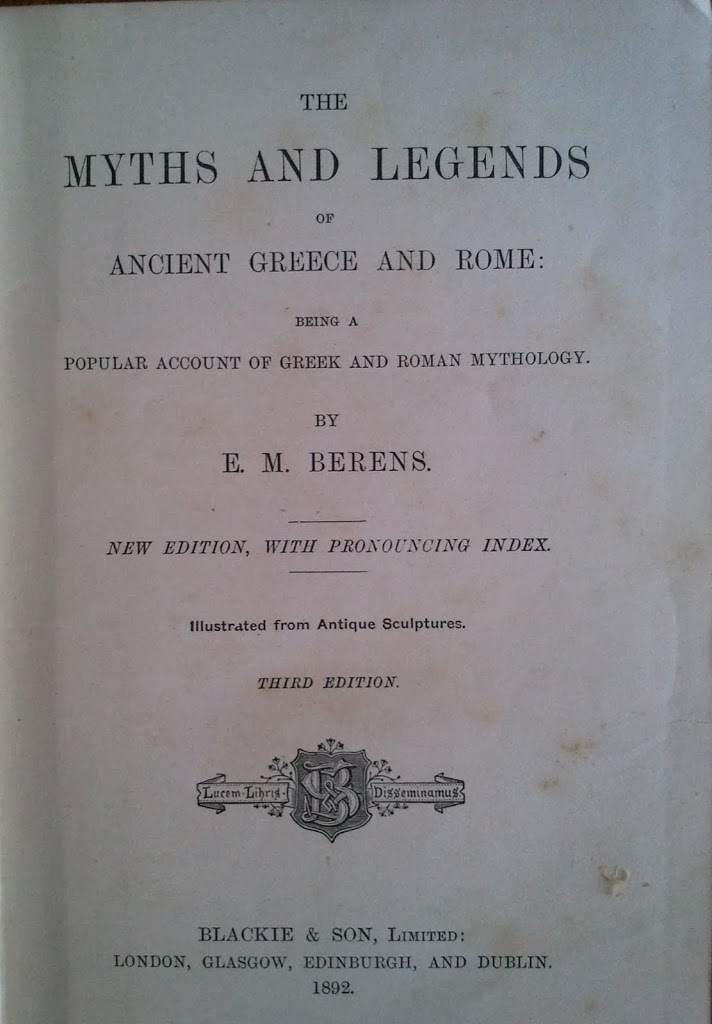 The ancient world has always held a fascination for me. It must be in my genes because one of my fondest memories is that of my father telling me stories about the Greek gods. As a kid, I also found a book in our house that had been handed down from generation to generation within my family entitled The Myths and Legends of Ancient Greece and Rome by E.M. Berens. It was published in 1892.

This book has a leather cover, the spine frayed so that the webbing that binds the folios is exposed. The pages are mottled, yellowing. It is a treasure. Inside, the lives of the fickle, adulterous, benevolent or malevolent deities are revealed; their bickering and flaws similar to mortals but their ability to bless, curse and manipulate man’s fate, divine.
Discovering Berens was not enough. I wanted to read such tales in the language of those times. Nerd that I was, I eagerly studied Latin at school and then Ancient Greek at university while also learning the history that gives context to such literature. It was wonderful to at last be able to translate parts of the works of classical authors and philosophers such as Livy and Homer, Plato and Socrates, Euripides and Julius Caesar.
The greatest impact upon me was that of the poignant tale told by the Roman poet Virgil of Trojan Aeneas, and Dido, the queen of Carthage. How tragic their love was! For Aeneas, fated to found Rome, deserted Dido causing her to throw herself upon a pyre in despair as his ship sailed away.
My novel also tells a love story between two people from different worlds: Rome and Etruria (a civilization in Italy that predated the Roman republic.) A young Roman girl, Caecilia, is married to Mastarna, a nobleman from the Etruscan city of Veii, to seal a truce between two implacable enemies. She is determined to remain true to her Roman beliefs but finds herself grappling with conflicting moralities when she discovers a sophisticated culture that offers her independence and pleasure. She is also introduced to a mystical religion which gives her the chance to defer her destiny. And so the gods play their role in Caecilia’s life as she strives to woo the goddess of fate and avoid the demons of the Afterworld.