My guest today is Crystal King who is a writer, culinary enthusiast, and social media expert. Her writing is fueled by a love of history and an obsession with the food, language, and culture of Italy. She has taught writing, creativity, and social media at Grub Street and several universities including Harvard Extension School and Boston University. 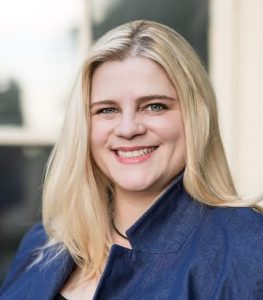 Crystal received her masters in critical and creative thinking from the University of Massachusetts Boston. She lives with her husband and their two cats, Nero and Merlin, in the Boston area. You can connect with Crystal via her website, Twitter, Facebook, Pinterest, Tumblr, Goodreads, Google+, and Instagram

Crystal’s debut novel Feast of Sorrow is a delicious mix of culinary delights and drama. I was delighted to endorse the book as follows:

“An engaging foray into the treacherous world of Claudio-Julian Rome from a fresh perspective. Who knew that the gourmand Apicius was larger than life? King deftly serves up intrigue, scandal and heartbreak with lashings of exotic sauces, mouth-watering recipes and the occasional drop of poison. Highly recommended.”

As a fellow Romaphile, I was interested to hear Crystal’s sources of inspiration. 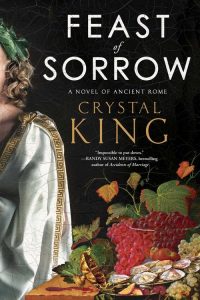 I was a very early reader and that led me to begin writing when I was very young, at the age of five or so. I had great, encouraging teachers. I remember being chosen by my school to attend a young writers conference when I was ten. The author speaking was Madeleine L’Engle and I was so excited because I loved her books. My influences over the years have been eclectic, ranging from poets like Anne Carson and Czeslaw Milosz to authors such as Stephen King, Margaret Atwood, Ursula K. LeGuin, Anais Nin and MFK Fisher. I also love reading the classics such as Tacitus, Virgil, Herodotus, Dante and Shakespeare.

I was writing a different book, about a celebrity chef with a special set of knives. I needed an origin story for these knives, which had been passed through the centuries from chef to chef. I was reading a book on banquets called Feast: A History of Grand Eating by historian Roy Strong. There was a line about how the ancient gourmand, Apicius, died. I thought I would use that idea and I wrote a scene with Apicius and how he had the knives made. When I finished I realized that was far more interesting than my other concept. I began researching everything I could about ancient Rome and Feast of Sorrow was born.

I tend to be most interested in anything pre-1600, possibly because there is more mystery there. As a child I was drawn to the ancient world in particular and dreamt of seeing the Pyramids or visiting the Rome described in myths. However, as I get older, I find my interests have varied a great deal and it becomes more about the story itself. For example, I have plans for a book set in 1800s Italy and for another set in 1930s Italy, both books about food and chefs.

The almighty Google is a source of a lot of fantastic information, thankfully, enabling me to do a lot of research without having to leave my desk. I also spend a lot of time with my head in a book. I read fast, and voraciously, devouring anything I can of the time period including writers of the era, books describing the customs, foods, politics, architecture, etc. I want to know everything I can about the period in which I’m writing so that I can paint the most evocative picture.  Nothing, however, can compare to going to Italy to walk in the footsteps of my character and to talk to historians first hand.

It took me about 3-4 years or so of writing and editing then another 3 to find an agent, then 6 months to land the contract and then another 18 months until the book is in the world. Essentially it took me the better part of a decade to see it published. Hopefully subsequent books will happen much faster!

It depends. Sometimes I will reach for the thesaurus, while other times I will just add a big XX and highlight that spot in the manuscript till I can come back to it later. On some bigger ideas where I’m stuck I’ll describe the problem to my husband who nearly always has a great solution or he jars something loose in my thoughts that spurs me to an answer.

Not sure how unusual I am overall. I tend to be very easily distracted and it can be helpful when I go to places specifically to write, such as the library or a coffee shop. Turning off the wi-fi is important to making sure I’ll get something down on the page. If I start researching that could lead me down a rabbit hole that is interesting but not necessarily as beneficial to my writing. I really love writing in the winter in my little study next to the fireplace, cat on my desk, with a glass of wine, typing, typing, typing away.

I like Scrivener a lot and used it exclusively when I wrote Feast of Sorrow. I stopped using it a few years ago when my husband bought me a Chromebook for my birthday. I couldn’t install Windows software on it—it was an online Android type of device. If I had chosen the laptop I would have picked something different but I wanted to give it a good go as my husband seemed so pleased that he had chosen it for me. I ended up using Google Docs for my second novel. I bought a new laptop last year and attempted to go back to Scrivener but found that I was frustrated that I couldn’t keep documents in one place and access them anywhere, from different computers. I went back to Google Docs. I’ll probably add the chapters back into Scrivener when I start the editing process…being able to do global search and replace is helpful. I do like writing long-hand, mostly in bars and cafés. When meeting friends I will sometimes to the location early and try to get a half hour of freehand writing done. I find those short bursts of writing are sometimes some of the most lucrative. 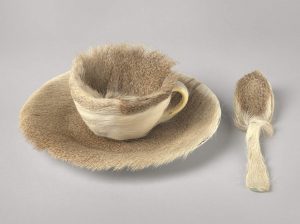 When I was a child (in the 1970s) I had a set of Childcraft encyclopedia books. My favorite volume was the one on art. I poured over that, memorizing the incredible works of art within. There was a photo of a coffee cup, saucer and spoon that were entirely made out of fur, a piece by Meret Oppenheim called “Object.”  It was such a sense of wonder for me as a kid. Why would you put fur on an object like that? What could you drink from a cup made from fur? What sort of person would own a cup of that ilk? How would the spoon feel if you picked it up? It made me think and made me imagine. When I randomly came across the piece in New York’s Museum of Modern Art (MoMA), I cried. I don’t think I realized it was a real thing that I might someday see in person.

The best advice is the truest. Derriere in the chair. Even if you don’t feel like it, write, write, write. Writing a paragraph of garbage is better than no writing at all. The more you write the better you become.

My books are thematic but stand-alone, all about Italian chefs. I’m currently working on a novel now about Bartolomeo Scappi, who was the chef to several popes in the Renaissance. The working title is The Secret Chef, which is actually the translated job title he held as a private chef, or cuoco segreto. It’s also fitting, however, because the book also holds a fifty-year secret love affair at its heart.

Set amongst the scandal, wealth, and upstairs-downstairs politics of a Roman family, Crystal King’s seminal debut features the man who inspired the world’s oldest cookbook and the ambition that led to his destruction.

On a blistering day in the twenty-sixth year of Augustus Caesar’s reign, a young chef, Thrasius, is acquired for the exorbitant price of twenty thousand denarii. His purchaser is the infamous gourmet Marcus Gavius Apicius, wealthy beyond measure, obsessed with a taste for fine meals from exotic places, and a singular ambition: to serve as culinary advisor to Caesar, an honor that will cement his legacy as Rome’s leading epicure.

Apicius rightfully believes that Thrasius is the key to his culinary success, and with Thrasius’s help he soon becomes known for his lavish parties and fantastic meals. Thrasius finds a family in Apicius’s household, his daughter Apicata, his wife Aelia, and her handmaiden, Passia whom Thrasius quickly falls in love with. But as Apicius draws closer to his ultimate goal, his reckless disregard for any who might get in his way takes a dangerous turn that threatens his young family and places his entire household at the mercy of the most powerful forces in Rome.

Many thanks Crystal – good luck with Feast of Sorrow!