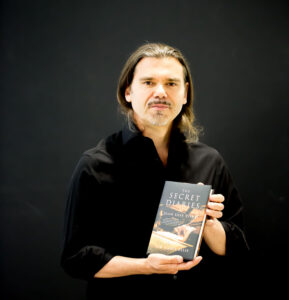 My guest today is Tim Darcy Ellis who is a writer, physiotherapy business owner, and a professional archaeologist. He currently runs his own business, Excel Physiotherapy and Wellness (founded 2013 in Sydney), and writes historical fiction part-time.

Tim studied Archaeology at the University of York (1985-88), and as a professional archaeologist, worked extensively on sites throughout England and Wales, including the excavations of London’s Roman amphitheatre. He held posts at the Museum of London and was a tour guide at the British Museum. History, archaeology and literature continue to be Tim’s passions and writing The Secret Diaries of Juan Luis Vives enabled him to revisit his fascination with European early modern history.

You can buy The Secret Diaries of Juan Luis Vives on Amazon US and Amazon AU. Connect with Tim via Facebook.

I don’t know where it started, but I was obsessed with writing from an early age. It was mostly history and imagined history, rather than creative writing.

Growing up, I inherited the four weighty, leather-backed volumes of Hutchinson’s Illustrated Story of the British Nations, written between the two world wars. The images, from the stone age through to the end of the First World War were so vivid, and it gave me an indelible blueprint of the epochs of British history. I lingered over the Tudors and Stuarts, so full of passion, plot and treachery. I lost myself in the wandering of what life was like for the ordinary people during that period, and what life was like for immigrant and minority communities.

After standard English children’s fiction such as Enid Blyton (much criticised but much loved), I read masterpieces such as The Lord of the Rings (JRR Tolkein, 1955) and the War of the Worlds (HG Wells, 1898). I studied the Greek Classics at university, and although I loved Euripides, I swore that EV Rieu’s 1950 translation of Homer’s The Iliad would be my desert island book. I read the great European writers such as Dickens, Hardy, Chekhov and Zola. Then I found relief in American Literature such as Harper Lee’s To Kill a Mockingbird (1961) and JD Salinger’s The Catcher in the Rye (1949). There was a clarity, and crispness about those books that felt new to me, and I then read Maya Angelou, Alice Walker and Toni Morrison. My favourite writer would be Kazuo Ishiguro, but I read historical fiction and immensely enjoy Geraldine Brooks, Julian Barnes and Umberto Eco.

I was researching my family – the Elisha family who lived in the Jewish quarter of London in the eighteenth century. In my research of London’s Spanish Jews, I stumbled across this incredible figure, Juan Luis Vives. Vives was born to a family of forcibly converted Spanish Jews in 1492 when Jews were expelled from Spain. He fled the Inquisition there at the age of 16, never to return. Vives visited England in the 1520s where he became the tutor to Princess Mary Tudor and a confidante of both Henry VIII and Catherine of Aragon, playing a dangerous game of double agent. He was a visionary, a man ahead of his time, and when I found him, I felt compelled to tell his story.

I found him to be the most complex and fascinating character. Although he left a vast amount of writing, he lead the ‘double-life,’ keeping so much of himself and his background hidden. Despite that, he wasn’t afraid to challenge Popes and Kings, so I became interested in getting to know him ‘from the inside out,’ which is why I wrote this in the first person. 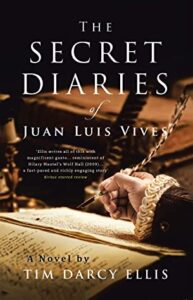 I am particularly interested in two periods. As a former archaeologist, I am fascinated by late and post-Roman Britain, and secondly, as a writer by the Tudors and Stuarts.

In truth, I’ve never felt entirely convinced by the narrative of Roman Britain’s demise, and I’ve found the recent discoveries at Tintagel and Chedworth Roman Villa to support my intuitive view of 5th century southern Britain.

The Tudors and Stuarts are where history becomes very real for me – for the first time; I can strongly imagine the characters and the language. I get a sense of day-to-day life in a way that I can write about with at least a feeling of authenticity.

Writing The Secret Diaries of Juan Luis Vives has been a real labour of love, and has taken me about seven years to complete. I go to a lot of second-hand bookstores, and I have ordered a lot of material online. Academic sites such as JSTOR and Brill make it a lot easier to get hold of academic papers these days. Nothing really replaces talking to experts about the topic.

Occasionally that happens, and it is a question of ‘switching off my thinking,’ and allowing my subconscious mind to work it out. If I’m still stuck, I have to leave it for a day or two or even give myself space from others and go for a long walk. Usually, the word or phrase will come.

For several years, I was a professional archaeologist before emigrating to Australia in 2000 for family reasons and retraining as a Physiotherapist. My writing keeps me in contact with my background in history and archaeology.

I don’t use Scrivener, and I do a lot of writing long-hand, especially when researching the historical context. That requires me to be very organised with my notes. I am looking at a “Re-markable” device where I can handwrite and then convert to text, for my next novel. I use the whiteboard a lot, when I’m working out relationship and timelines. 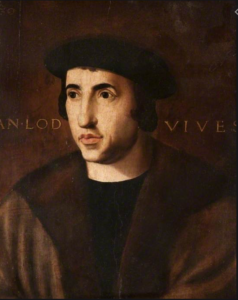 I like the portrait of Vives as a young man before so many of the more difficult life events happened to him. He is full of the earnestness of the great scholar that he was, but also full of life and vivacity. There is an English artist called Douglas Kirsop, who paints Australian outback landscapes. His work is so impressive, and I have an original in the remote Pilbara region. I can lose myself in it for hours.

Keep going and just don’t be put off by the naysayers! It is important to keep your unique voice, but definitely do your research about plot, character and the basic constructs of a good story.

I am working on a novel about the real-life Elizabethan character who may have inspired Shakespeare’s Shylock in The Merchant of Venice. His name was Roderigo Lopes, and he became the personal physician to Elizabeth I before suffering a spectacular fall from grace. He’s more light-hearted than Vives, and I’m enjoying getting to know him.

My grand oeuvre is my Sephardic trilogy. The trilogy is about the great men who eventually persuaded the English monarchs and government to allow the resettlement of Jews into England, and her colonies, something that ultimately transpired in 1665.

The novel opens in Bruges, the Spanish Netherlands, in 1522. Living as a Nuevo Cristiano, Vives is on the run from the Spanish Inquisition, which devastated his Jewish family in Valencia.

In a pivotal moment, England’s Sir Thomas More invites him to the court of Henry VIII and Catherine of Aragon to become the tutor to Princess Mary Tudor. Vives quickly becomes torn between conflicting requests for aid from the king and the queen, whom the king now wishes to divorce. He walks a swaying tightrope between the two of them, knowing that to help one, he must betray the other. All the time, he tries to negotiate an escape from Spain for his family, and salvation for the Jewish people.

Central to the plot are Vives’s relationships with key players of the period, such as Erasmus, Cardinal Wolsey and Anne Boleyn, and the clandestine Jewish communities of Bruges and London. Vives is conflicted – in terms of his faith and between the love of two women. Forced to run, he suffers feelings of guilt regarding the family he left behind in Spain and the adopted family he left behind in Bruges. These circumstances drive much of the story.

Vives (1492-1540) was one of the great men of courage, and intellectual curiosity who defined the Renaissance as an age of scientific discovery, humanism, and scholarship. He truly was ahead of his time and has been named ‘The Godfather of Psychoanalysis (Zilboorg 1941), and the ‘Father of Psychology’ (Watson, 1915).

Although much admired in his day, and still so in Europe, his story has fallen away from the mainstream Tudor narrative known to most English speaking readers today. The Secret Diaries of Juan Luis Vives restores him, in fascinating detail, to his rightful place as a critical player of the period.

Thanks Tim – wonderful to interview a fellow Romaphile although you definitely have forsaken Roman Britain for the drama of Tudor times. 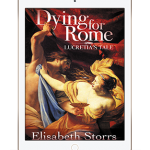