Today I welcome Tony Riches to Triclinium. Tony Riches is a full time author living in Pembrokeshire, West Wales. He was born within sight of Pembroke Castle, which features prominently in his new novel, the second book in The Tudor Trilogy. JASPER follows the true adventures of Jasper Tudor, Earl of Pembroke, son of Owen Tudor, the subject of book one, who founded the Tudor dynasty. After writing several successful non-fiction books, Tony turned to novel writing with ‘Queen Sacrifice’, set in 10th century Wales, followed by ‘The Shell’, a thriller set in present day Kenya. His real interest is in the history of the fifteenth century and now his focus is on writing historical fiction about the lives of key figures of the period. His last three novels have all become Amazon best sellers in the UK, US and Australia, and he is now researching the final book of The Tudor Trilogy, about the life of King Henry VII. 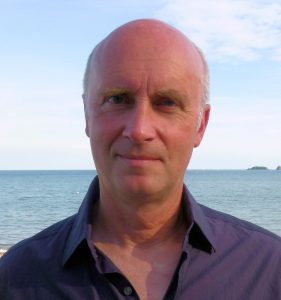 I’d had a successful career in senior management and began writing articles for magazines and journals as a hobby. I always planned to return to my home by the sea in Pembrokeshire, so writing has now become the perfect occupation, allowing me to choose my working hours and work wherever I wish. I was also encouraged by the success of my non-fiction books in the US, which gave me the confidence to become a full-time author.

What is the inspiration for The Tudor Trilogy?

I was born within sight of Pembroke Castle and began to study its history. I found that there were no books about Owen Tudor, the father of Sir Jasper Tudor, the Earl of Pembroke, who once owned and lived in Pembroke Castle. I found several accounts of the life of Henry Tudor, Jasper’s nephew, (who later became King Henry VII and began the Tudor Dynasty) but there were no novels that brought his story to life. That was how the idea for The Tudor Trilogy was born. All three books are based on the known facts and are as factually accurate as possible – and the truth is more amazing than anything I could ever dream up. 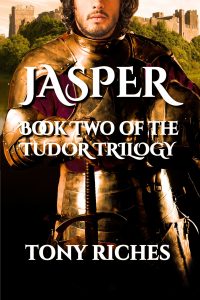 In book one, OWEN, a Welsh servant of Queen Catherine of Valois, the lonely widow of King Henry V falls in love with her and they marry in secret.  Their eldest son Edmund Tudor marries the wealthy heiress Lady Margaret Beaufort, and immediately fathers a child with her to secure her inheritance. Unfortunately, Lady Margaret is barely thirteen years old and the birth of her son, Henry, nearly kills her. When her husband dies mysteriously without even seeing his son, his younger brother Jasper Tudor swears to protect them.

This is during what have been known as ‘The Wars of the Roses’ and in book two, JASPER, Jasper and young Henry flee to exile in Brittany and plan to one day return and make Henry King of England.  In the meantime, King Richard III has taken the throne and has a powerful army of thousands – while Jasper and Henry have nothing. Even the clothes they wear are paid for by the Duke of Brittany. So how can they possibly invade England and defeat King Richard at the Battle of Bosworth?

I am currently researching the final book of the trilogy, HENRY, and plan to explore how he brought peace to England by marrying the beautiful daughter of his enemy, King Edward IV. I also want to understand how their son, who became King Henry VIII, became such a tyrant and transformed the history of England forever.

Is there a particular theme you explore in the new book, JASPER?

Yes – Jasper’s story is an amazing tale of self-belief and faith against incredible odds. More than once his faith is really tested, and he begins to seek revenge. Ultimately, even the cunning King Louis of France recognises the value of Jasper’s loyalty and his determination to keep his promise to protect his young nephew Henry Tudor.

What inspired your fascination with the fifteenth century?

Before starting to research the story of the early Tudors, I wrote a novel about Sir Richard Neville, known as WARWICK. One of the wealthiest nobles in England, Warwick ‘the kingmaker’, amazingly fought on both sides in the Wars of The Roses. I also wrote The Secret Diary of Eleanor Cobham, about one of my wife’s ancestors, who knew Warwick and was imprisoned for life in Beaumaris Castle for witchcraft. As part of the research for these books I acquired a wonderful collection of books about every aspect of fifteenth century life – and became something of an expert on the Wars of the Roses! 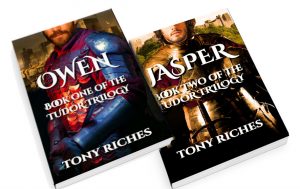 I enjoy the research for my books and there is no substitute for uncovering primary sources, even it is means deciphering Latin – or medieval Welsh, as I have done recently. As part of the research for The Secret Diary of Eleanor Cobham, my wife and I visited Beaumaris Castle in Anglesey, where Eleanor Cobham ended her days. We were able to stand in the actual chapel Lady Eleanor would have prayed in, and in the nearby church are effigies of her jailer, Sir William Bulkeley and his wife Lady Ellen, so I was able to look into their faces. I also found detailed transcripts of her trial for witchcraft as well as the better known accounts of her husband, Duke Humphrey of Gloucester, which greatly helped me understand her motivation.

With The Tudor Trilogy I am lucky to live so close to Pembroke Castle, and have often stood in the small room where Henry Tudor was born. I am also fortunate to be in contact with many authors who specialise in Tudor history, including Terry Breverton, who has written the definitive biography of Jasper Tudor, and Elizabeth Norton, biographer of Margaret Beaufort.

I am a great fan of Hilary Mantel, and her brilliant sense of immediacy in Wolf Hall convinced me to risk writing OWEN in the first person, present tense. (JASPER speaks in book one in the third person and continues like that in book two.)  I’m currently enjoying CJ Sansom’s huge new book Lamentation and the way he evokes the tensions of the last days of Henry VIII, so I’m sure some of that will influence the way I approach my next book about his father, Henry VII.

I sleep on it – and have to keep a notebook and pen by my bed to write it down before I forget.  If I’m not sure about a particular word, it’s so easy now just to search in the Internet, although that’s how even the nest writers can become distracted!

Yes, I’m fascinated by the effigy of Jasper Tudor’s mother, Queen Catherine of Valois in Westminster Cathedral. It is made from a cast of her face made after death and brings the young woman to life in a way even the best portrait fail to. 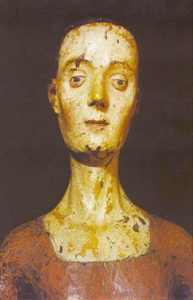 Effigy of Catherine of Valois

A page a day is a book a year, so even if you still have to juggle other responsibilities, write something, every day, until it becomes a habit, which it will.

Thank you for inviting me to this excellent ‘on inspiration’ series. Details of my books, including video trailers, can be found at my WordPress site and my popular blog, The Writing Desk.

Following the best-selling historical fiction novel OWEN – Book One of The Tudor Trilogy, this is the incredible story, based on actual events, of Owen’s son Jasper Tudor, who changes the history of England forever.

England 1461: The young King Edward of York takes the country by force from King Henry VI of Lancaster. Sir Jasper Tudor, Earl of Pembroke, flees the massacre of his Welsh army at the Battle of Mortimer’s Cross and plans a rebellion to return his half-brother King Henry to the throne.

When King Henry is imprisoned by Edward in the Tower of London and murdered, Jasper escapes to Brittany with his young nephew, Henry Tudor. After the sudden death of King Edward and the mysterious disappearance of his sons, a new king, Edward’s brother Richard III takes the English Throne. With nothing but his wits and charm, Jasper sees his chance to make young Henry Tudor king with a daring and reckless invasion of England.

Set in the often brutal world of fifteenth century England, Wales, Scotland, France, Burgundy and Brittany, during the Wars of the Roses, this fast-paced story is one of courage and adventure, love and belief in the destiny of the Tudors.

‘Without the heroic Jasper Tudor there could have been no Tudor dynasty.’   Terry Breverton, author, historian and Television Presenter.

‘Jasper Tudor was the greatest survivor of the Wars of the Roses. Whilst almost all his contemporaries suffered often brutal and bloody deaths, Jasper persevered against all the odds. That’s not to say it was easy, as you will discover…’  Nathen Amin, Author of Tudor Wales

Tony – Thanks for joining me on Triclinium to share your sources of inspiration. Absolutely fascinating. Good luck with JASPER.

Tony’s books are available on Amazon US, Amazon UK and Amazon Australia. You can find Tony on Facebook and Twitter @tonyriches