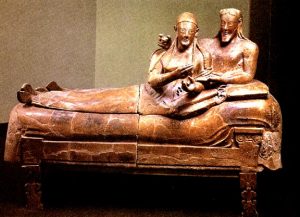 ‘There was a smooth, round contentment to her as she sat upon a dining couch with her husband, head resting against his shoulder as he embraced her. Their happiness revealed by the curve of their lips and the ease of their touch…’ The Wedding Shroud

Lucy Bertoldi of HF Book Muse Litblog recently featured my guest post on the beautiful Etruscan funerary art which often depicts lovers as a symbol of fertility which wards off evil after death. Lucy is a dedicated reviewer of historical fiction and often sponsors giveaways. Why not visit her blog – I’m sure you will enjoy it.

Here is the post: Warding Off Evil: The Power of a Loving Embrace

I was inspired to write my novel, The Wedding Shroud – A Tale of Ancient Rome, when I found a photo of a C6th BCE sarcophagus of a man and women lying on their bed in a tender embrace. The casket (known as the Sarcophagus of the Married Couple) was unusual because, in this period of history, women were rarely commemorated in funerary art let alone depicted in such a pose of affection. The image of the lovers remained with me. What kind of culture exalted marital fidelity while showing such an openly sensuous connection? What ancient society revered women as much as men? Discovering the answer led me to the Etruscans, a society that existed from before archaic times in Italy and was mainly situated in the areas we now know as Tuscany and Lazio.

No better example of this is a particularly striking double sarcophagus found in Vulci in Italy and which is now located in the Museum of Fine Arts, Boston. Wrought in fine white limestone, the man and woman lie entwined in each other’s arms. However, unlike the anonymous Married Couple, this husband and wife can be identified. They are Larth Tetnies and Tanchvil Tarnai. The very fact that Tanchvil has two names is evidence of the status of Etruscan women. In Rome, females only had one name-their father’s in feminine form. In Etruria, the bloodlines of both sides of a woman’s family were often recorded on their casket. 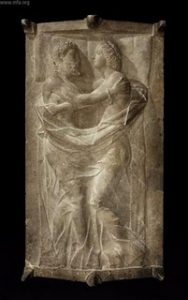 There was a second sarcophagus found in the sepulchre at Vulci. It is narrow and only held the remains of a woman, Ramtha Visnai, but its lid depicts her embracing her husband, Arnth Tetnies. They are the parents of Larth. This coffin is made of rough nenfro stone. Wrapped in their shroud, the figures embrace each other on their bed. Unlike the sexually charged younger couple, the older pair are more contemplative as they face each other although the sight of their feet peeping from beneath the covers hints at the relaxed familiarity of their marriage.

‘She lay naked in effigy upon her coffin, fixed forever in her nuptial bed. Lying on her side, she faced her husband, their arms encircling each other,swathed in their transparent wedding shroud and unconcerned that their bare feet were uncovered in abandon.’ The Wedding Shroud

The Married Couple inspired me to write my novel, but the two caskets in the Tetnies tomb were the inspiration for the title of The Wedding Shroud. For both couples lie beneath mantles that I came to understand could symbolise the large veil under which an Etruscan bride and groom stood when they took their vows. In effect the spouses were swathed in their wedding shroud for eternity, their union protecting them from the dark forces that lay beyond the grave.

As for the conflicting views of Etruscan women it is clear from studying this society’s art that they celebrated life. Many worshipped the religion of Fufluns, the Greek Dionysus and Roman Bacchus, whose later cult adherents were famous for indulging in debauchery but in its purest form was a belief in the power of regeneration. So which version is correct? Sinners indulging in group sex or steadfast wives? Perhaps both, because the concept of a culture that condones female promiscuity while also honouring wives and mothers is not necessarily contradictory. For while it can be erroneous to compare modern societies with ancient ones, it could be argued that this attitude to females occurs in many present-day Western cultures today.

Subscribe to Elisabeth’s newsletter to be notified of new posts on Triclinium. You will also receive a FREE copy of her short story, Dying for Rome: Lucretia’s Tale.