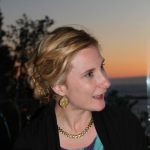 Her love of history came from reading the adventures of Asterix and Tintin at a young age and continued into adult life, when she studied Classics and Roman History to postgraduate level at university.

While working as a desk slave by day, she spends her evenings escaping into other worlds via her writing. The first two books in her Visigoth Chronicles are Jaws of the Wolf and Shadow of the Eagle.

So who were the Visigoths?

Researching any ancient people is fraught with difficulties. Sources are contradictory and often biased. The archaeological record is fragmentary. These have been some challenges I found while researching my series, the Visigoth Chronicles. But it’s been a fabulous journey and one I’m delighted to share.

The first issue was the name Visigoth. You’d think the name would be the easiest part to get right, wouldn’t you? In fact, the Visigothi weren’t a ‘real’ tribe. The Roman historian and statesman Cassiodorus invented this compound word in the sixth century. It means simply ‘Western Goths.’ He coined the term to ‘match’ a Gothic tribe called the Tervingi to the Ostrogothi (as this name, which was already in use, meant ‘Eastern Goths’). 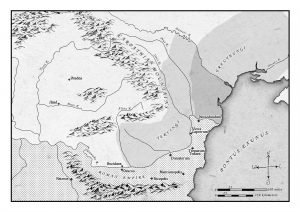 The Tervingi came from the lands to the north of the Danube River and the west of the Black Sea—the area now occupied by northern Romania, Moldova and southern Ukraine. The Ostrogoths’ antecedent tribe—the Greuthungi—inhabited the lands to the east, closer to the Black Sea. Hence, Cassiodorus called the two related peoples Visigothi and Ostrogothi: Western Goths and Eastern Goths.

If the Tervingi had stayed north of the Danube, we might not know much about them today. But, in 376 CE, the Huns swept through their lands, ravaging and destroying everything in their path. After months of fighting, and losing, the Tervingi left their villages en masse and set up a camp on the northern bank of the Danube, opposite the Roman fort town of Durostorum (modern Silistra). They never returned to their old territory. Following months of negotiations, the Eastern Emperor, Valens, allowed them into Roman territory. In exchange, the Tervingi had to supply troops for the Roman army and convert to Christianity.

After their entry into the Roman Empire, the Tervingi appeared more often in written record, but not all reports were positive. A common complaint was that they stank due to their habit of wearing furs regardless of the climate and coating their hair with rancid butter. Procopius, writing in the sixth century CE, tells us the Visigoths were an attractive people to observe, if not to smell: “they all have white bodies and fair hair, and are tall and handsome to look upon,” despite the majority having “threatening blue eyes.”

The Visigoths and the Romans

The years that followed the Tervingi mass migration were tumultuous ones. Treachery on the part of the Romans led to their rebelling against their erstwhile saviours. Sweeping through the Roman territories, they eventually sacked Rome itself in 410 CE. The Tervingi transformed from a distinct ethnic group to a marching army. Escaped slaves, displaced Romans and other tribes joined their forces. This upheaval led to social and cultural transformation, as well as geographic relocation. No wonder they adopted a new name.

After long years of war, the Visigoths settled briefly in Toulouse before the Franks forced them out in 507 CE. They finally achieved relative peace and stability when they established their kingdom on the Iberian peninsula, where they remained until the seventh century, when the Moors arrived. 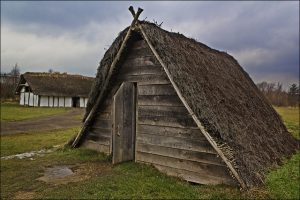 At the beginning of the Visigoth Chronicles, the Tervingi still lived north of the Danube. During this period, archaeological record provides most of the evidence regarding their culture. The excavations show they lived in small settlements, usually of no more than 10-20 dwellings built in river valleys. Usually arranged in parallel lines, their houses were of two main types. The rich lived in wooden stall-houses or byre-dwellings, with their living quarters in one section and their livestock stabled beside or underneath. The poor inhabited sunken huts with wattle-and-daub or stone walls and rush roofs. 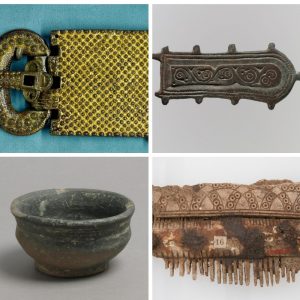 Crafts were a big part of Tervingi society. Most villages had potteries attached to create their domestic and functional goods, including mugs and cups, storage jars and cooking pots. By far the most common items unearthed are shallow drinking bowls. No wonder the Goths were as famed as the Vikings for their beer and mead consumption! Lots of Roman amphora and pottery fragments have also been found on these sites, proving strong trade links with their southern neighbours.

The archaeological find that fascinates me the most is large workshops dedicated to the making of hair combs. Deer antlers, or sometimes iron, were the most common materials used for these. Combs were a popular item among the Tervingi. Their importance increased through time, with the designs becoming more elaborate and intricate.

Along with the ubiquitous pottery and combs, belt buckles and brooches were frequent burial items. Jewellery, such as rings, earrings, bracelets and necklaces, have also been found in many graves. However, Tervingi were never buried with their weapons, unlike other similar tribes. 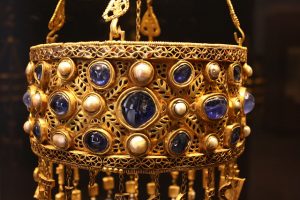 Like the Etruscans, the Visigoths were renowned for their jewellers (see my Pinterest page for lots of fabulous examples). I make use of this in my series. The Visigoth Chronicles features a master jeweller and his apprentice, Gelvira. The most spectacular examples of their jewellery come from Visigothic Spain, hidden in graves or buried hoards. The famous Treasure of Guarrazar contains 26 votive crowns and gold crosses. Archaeologists unearthed these items in an orchard near Toledo during the nineteenth century. Imagine finding that much gold under your oranges!

To conclude, prompted by invasion of their own lands, these obscure and unique people made an extraordinary migration that led them to conquer western Europe in only a few generations. Our knowledge of them and their origins is limited, but continues to grow. What we do know is that they left a legacy that continued for centuries, in some cases to the modern day. 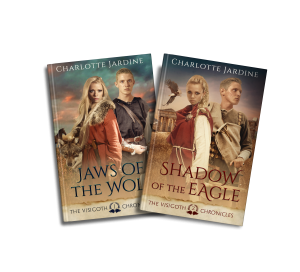 In the Visigoth Chronicles, Gelvira, the daughter of a warrior has been allowed to train as a jeweller. She starts off as privileged, sheltered, and very sure of her place in the world. Her childhood was spent during a time of peace – and she didn’t expect this to change.

By contrast, Adafuns—her childhood friend—has grown up a slave. His life has forever been uncertain and, although he has always dreamt of becoming a warrior and thus winning his freedom, he takes nothing in his life for granted, as he knows everything can so easily be taken away.

As the books progress, their positions change. Adafuns is captured by the Huns and offered the opportunity he always wanted: to be trained as a warrior. Only, the price he must pay is turning his back on his family and Gelvira.

Gelvira is forced to put aside her personal wants in order to help her people survive. Instead of making earrings and pendants, she must cast sling bullets and straighten spearheads. But even that isn’t enough to save her people, and they must flee, leaving everything she knew behind.

I loved researching and writing these stories and hope you’ll join me in exploring this fascinating period of history through ’Vira and Ada. 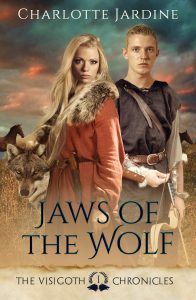 He’s her father’s slave. She’s promised to another. But war changes everything.

Northern Europe, 376 AD. Gelvira dreams of becoming a powerful jeweler. But the arrogant son of a tribal elder wants her for a wife instead. After a Hun raid sends her people into exile, her chance to master the ancient secrets of her craft are stripped away…

Adafuns yearns to become a great warrior and win Gelvira’s affection. But as a slave in her father’s service, he has little chance of either. Captured and carried off by the Huns, Adafuns’ dream of being a warrior could come true… at the cost of losing Gelvira forever.

With her people starving, marrying the tribal elder’s spoiled son may be Gelvira’s only hope to save her family. Will Adafuns reunite with the exiles in time to free Gelvira from her loathsome vows?

JAWS OF THE WOLF is the exciting first novel in the epic Visigoth Chronicles series. If you like strong heroines, thrilling action, and rich historical detail, you’ll love Charlotte Jardine’s page-turning saga.