Elisabeth Storrs has long had a passion for the history, art and myths of the ancient world. 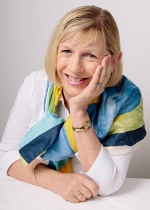 She is an Australian author and graduated from University of Sydney in Arts Law, having studied Classics. Her curiosity piqued by an Etruscan sarcophagus depicting a couple embracing for eternity, she discovered the little known story of the struggle between Etruscan Veii and Republican Rome and the inspiration to write the ‘A Tale of Ancient Rome’ Saga. Now Elisabeth is hurtling centuries forward to write Treasured, a novel set in WW2 Germany about looted art, bizarre Nazi archaeology and a race to save the Trojan Gold during the fall of Berlin. Be the first to hear about her new release by following her on Bookbub.

Elisabeth lives in Sydney and over the years has worked as a solicitor, corporate lawyer and corporate governance consultant. She is the founder and Chair of the Historical Novel Society Australasia (HNSA). She is also the program director for the HNSA conferences. In 2020, she was part of the team that founded the $100,000 ARA Historical Novel Prize. She is also writes for the History Girls.

Elisabeth was traditionally published in Australia, then gained a readership in the global historical fiction community through self-publishing her  ‘A Tale of Ancient Rome’ saga. This led her to securing an international publishing contract with US publishers, Lake Union.

The Wedding Shroud was endorsed by Ursula Le Guin and judged runner-up in the 2012 Sharp Writ Book Awards for general fiction and was a finalist in the 2012 Kindle Book Reviews’ Best Kindle Book Award. It was also nominated in Australia for the Barbara Jefferis Award, Dobbie Literary Award, Nita B Kibble Award and the CAL Waverley Library Award for Literature. International best-selling author, Ben Kane, named it in his top three books set in the classical world.

The Golden Dice was endorsed by Ben Kane and Sherry Jones, won a first category award in the 2014 Chanticleer Reviews’ Chaucer Award, and was judged runner-up in the 2013 Sharp Writ Book Awards. It was also named as one of the top memorable reads of 2013 by Sarah Johnson, the reviews editor for the Historical Novels Review.

The third book, Call to Juno, has been endorsed by Kate Quinn and was selected as an Editor’s Choice in the Historical Novels Review. It won a first in category award in the 2017 Chaucer Award.

Researched and written over a period of fifteen years, the books in the ‘A Tale of Ancient Rome’ saga vividly describe the world of Etruria, a sophisticated society ultimately destroyed by Rome but which heavily influenced its conqueror’s culture from republican into imperial times. There have been very few novels that have explored the world of the Etruscans and the early Roman Republic which makes the novels unusually engrossing reads for historical fiction lovers. An archaeologist loved her Tales of Ancient Rome saga so much she created an audio-visual exhibition featuring Elisabeth’s characters voicing votive statuary at the Museo dell’Agro Veientano near Rome.

Elisabeth is offering subscribers a free copy of her short story Dying For Rome: Lucretia’s Tale in which she retells the story of the legendary Roman woman from a fresh perspective.  Subscribe to her monthly inspiration newsletter to receive a free copy of this 80 page story as well as enjoy the chance to win a giveaway from a featured author each month.