A Tale of Ancient Rome – Book 1

‘All the drama and sensuality expected of an historical romance, plus a sensitivity to the realities of life in a very different time and world…’
Ursula Le Guin 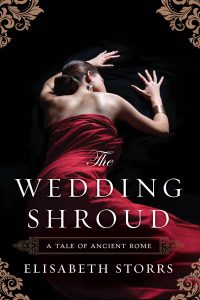 In 406 BC, to seal a tenuous truce, the young Roman Caecilia is wedded to Vel Mastarna, an Etruscan nobleman from Veii. Leaving her militaristic homeland, Caecilia is determined to remain true to Roman virtues while living among the sinful Etruscans. But, despite her best intentions, she is seduced by a culture which offers women education, independence, sexual freedom and an empowering religion. Enchanted by Veii, but terrified of losing ties to Rome, Caecilia performs rites to delay becoming a mother, thereby postponing true entanglement. Yet as she develops an unexpected love for Mastarna, she is torn between her birthplace and the city in which she now lives.

The Wedding Shroud was judged runner-up in the 2012 Sharp Writ Book Awards for general fiction and was a finalist in the 2012 Kindle Book Reviews’ Best Kindle Book Award. It is the first book in the Tales of Ancient Rome Saga, which includes The Golden Dice and Call to Juno.

Buy “The Wedding Shroud” Kindle eBook or Paperback at:

The Golden Dice (A Tale of Ancient Rome – Book 2)