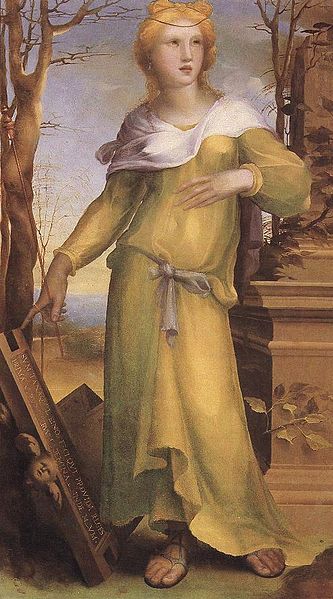 ‘Tarchon pointed to the eagle as it soared into the stillness.
‘An eagle brought a sign to Tanaquil that her husband would be King of Rome.’

Caecilia refused to look at the bird, not wanting to hear another of Tarchon’s tales, especially about an Etruscan woman who became a Roman queen.’ The Wedding Shroud
As can be seen from the tragic stories of Lucretia and Virginia, the women of early Rome only gained fame when used as exemplars of Roman virtues. In each case their deaths were the catalyst for revolution against oppressive rulers.
Yet one famous woman of early Rome did hold power. Her name was Tanaquil. She was not Roman, though, but Etruscan. And she did not gain fame for dying but for being a prophetess and a queen.
Tanaquil was an Etruscan noblewoman from the city of Tarquinia. Her husband, Lucumo, was the son of an immigrant Greek. Tanaquil knew that he would not gain power in her city because of this and so she convinced him to travel to Rome to seek his fortune.
As their carriage ascended the Janiculum Hill, an eagle swooped down and snatched Lucumo’s cap carrying it aloft before once again replacing it on his head. Skilled as a seer, Tanaquil predicted that, as the bird had flown from the direction of Rome and taken the cap from the crown of Lucumo’s head, her husband was destined for greatness.
On arrival in Rome Lucumo became friend to the king, Ancus Marcius, as well as guardian to his children. When Marcius died before his children were old enough to take the throne, Lucumo was elected to be king by the Romans and changed his name to a Latin one – Lucius Tarquinius Priscus. He was to be the first of three Etruscan kings who ruled Rome before the third, Tarquinius Superbus, was expelled after the rape of Lucretia.So could the myth of a prophetess such as Tanaquil be based in fact? The Etruscans were indeed skilled in the art of foretelling the future from the flight of birds. And there is evidence from funerary art and tomb inscriptions that women may well have been priestesses of high standing. The Roman author, Livy, who tells us Tanaquil’s tale, does not question her ability. In fact he writes that her powers of prophesy proved correct again when she saw a slave boy called Servius Tullius asleep with a blue flame burning above his head. Tanaquil predicted that he would also rule Rome.  When her husband was murdered, Tanaquil cemented her own power by supporting Servius Tullius in being appointed the monarch.  He in turn was to become one of the greatest and most just Kings of Rome (but that is another story…)
What is fascinating about Tanaquil is the fact she was, in every way, a player rather than a victim. As a queen and seer, she was instrumental in establishing and continuing the reigns of the Etruscan kings over the Romans. Her ambitions became those of the men she influenced. Unlike Lucretia and Virginia who were controlled by men and whose fate was to die for Rome, Tanaquil moulded destiny to her purpose. And strangely, whereas Etruscan women were usually criticised as wicked and corrupt by the Romans due to the freedoms afforded to them, Tanaquil was not reviled but revered. There are some who posit that she was later deified as a Roman Goddess of Fire, the Hearth, Healing and Women.
The image is of Tanaquil as painted by Domenico Beccafumi, (1486 – May 18, 1551) an Italian Renaissance – Mannerist painter who was a representative of the Sienese school of painting. This is apt as Siena was one of the cities of ancient Etruria. Image is courtesy Wikipedia Commons