My guest today is Australian author, GS Johnston, author of The Skin of Water and The Cast of a Hand and Consumption, noted for their complex characters and well-researched settings. His new release is Sweet Bitter Cane, a beautifully rendered novel exploring an Italian woman’s hopeful emigration to an exotic but rigorous life in the Australian cane fields that leads to an unexpected need for survival when WW2 breaks out. Enjoy ‘A Sweet and Bitter Time’, his post on the background to writing his new novel. 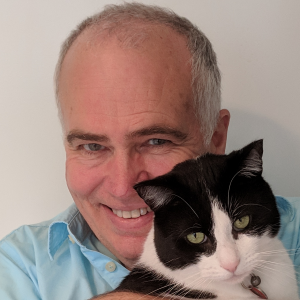 In one form or another, Johnston has always written, at first composing music and lyrics. After completing a degree in pharmacy, a year in Italy re-ignited his passion for writing and he completed a Bachelor of Arts degree in English Literature. Feeling the need for a broader canvas, he started writing short stories and novels.

Sweet Bitter Cane is available on Amazon. You can find all GS Johnston’s here.

A Sweet and Bitter Time

Writers are often asked where the first idea for a novel comes from, the question no doubt stirred by the vision of a writer hit by a lightning bolt, in a flurry of cats and dogs and paper and pens racing to the garret, and writing and writing, suffering, starving (me??), drowning in a sea of post-it notes until the novel is complete. I wish it was like that, but most of my novels have come from fractured and timorous trails, vague ideas simmering in the back of my mind for a very long time. Sweet Bitter Cane is a bittersweet case in point. 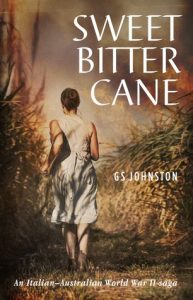 At twenty-eight, I had my first midlife crisis. The creative project I’d been working on had come to nothing. So intense was this work, I’d put off doing anything else. But now I just wanted to be secret and exult, run away for a little while. Even then Italy beckoned. I have absolutely no idea why beyond the food and … well … that combination of black hair, olive skin and blue eyes. Magic. And there was the promise of endless great coffee.

Before I left, I remember buying a small book, Give me Strength. Italian Australian Women Speak, published in 1989 by Woman’s Redress Press. I’ve no memory of how I found this book, probably a  radio interview heard in the car in a traffic jam. But the book was a collection of recollections by women who’d migrated to Australia from Italy. These stories opened my eyes to so many tales, so much heartache and struggle. In comparison, my recent failure paled. But there was one story I remember of a family who migrated between the wars. Before the outbreak of WWII, they were living in Balmain, at that time a working-class suburb of Sydney, and had bought a small corner store, forging a small success.

In June 1940, when Italy entered WWII, the father was arrested, deemed by an indiscriminate broom to be an enemy alien for no apparent reason than he’d been born in Italy, sweeping all these men into Concentration Camps. Isolated and distant from their families, suspected of all manner of ill will to their new nation, the men were never asked of their affiliations. In this case, the family had left Italy before Mussolini’s rise to power.

It left the woman to run the business on her own. In a Balmain Kristallnacht, the shop windows were smashed. She tried, asserted herself, but eventually closed the shop and went to live with a relative who ran a market garden in Sydney’s outer hills district. But the business was destroyed, never recovered, hopes and dreams shattered on a flimsy pretext. 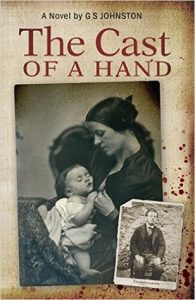 Occasionally I would hear or read other stories like these, and it would tickle this memory of the injustice and suffering. Often new information would come from the most oblique places, but once the antennae are alerted, perhaps they are the force guiding a writer’s attention, discerning and sorting. Little by little over thirty years, these bits of information turned and turned, gathering, a magnet and iron filings.

In 1901, Italians were invited to work on the cane fields of Far North Queensland. They suffered great hostility from the British Australians, especially from the workers’ unions, compounded when Italians afforded to buy lots of land. Soon accusations circulated that the Italians were sending money back to Italy, so it was only a small step to accuse them of being pro-fascist, and as a consequence pro-Japanese, despite the fact most of these people had left Italy before the 1921 rise of Mussolini. Kind of sounds familiar…?

But the Italian consulate in Australia did a great job of disseminating pro-fascist propaganda. To be fair, when the workers’ unions made it difficult for Italian cane cutters to be employed, the Italian consulate offered help. And the letters these people received from friends and family in Italy would only have dared to be positive. So, from the beginning, I had a feeling the Italians in Australia had a rather distorted view of what was going on in Italy, what fascism was, (fascio is a bundle, bunch or sheath) and consequently saw Mussolini as the saviour, only hearing of his great reconstruction of Italy after WWI.

But whilst the arrests of the men were the main injustice, the tragedy lay with the women and families. These stories interested me more. But when I finally started researching, I met the usual barrier – history was written from a male perspective. Most of the research, even the most current written by women, focused on men, and young men at that. 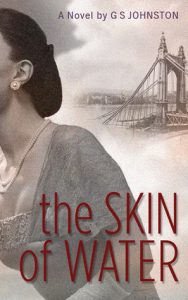 In the research, there were many fortunate moments, none more so than being given a folder of documents pertaining to the fate of an Italian woman, Gina Omodei. Her daughter lived next door to me – who would have thought? – odd what can happen when you talk to a neighbour. In a very fractured way, these documents told of the events after Gina’s husband’s arrest. Considering the temper of the times, some of her actions were perhaps a little naïve, but even so, no-one deserved what happened.

As the real Gina mutated into my character, the hybrid Amelia, the first piece I wrote was based on one of the documents, a thinly-veiled interrogation of Gina after her husband’s arrest. She was fearful what more could happen. A number of times, the report described her as a shrewd woman and that care needed to be taken. Gina was an intelligent woman, perhaps a threat. But under all this, I felt rather than this woman being accused of fascist support, old grudges were unfolding and these were the greater reasons for the arrests.

And so I started work on the novel, the untold story of a woman in this turbulent, sweet and bitter time.

Twenty-year-old Amelia marries Italo, a man she’s never met. To escape an Italy reeling from the Great War, she sails to him in Far North Queensland to farm sugarcane. But before she meets her husband, she’s thrown into the path of Fergus, a man who’ll mark the rest of her life.

Faced with a lack of English and hostility from established cane growers, caught between warring unions and fascists, Amelia’s steady hand grows Italo’s business to great success, only for old grudges to break into new revenge. She is tested by forces she couldn’t foresee and must face her greatest challenge: learning to live again.

Sweeping in its outlook, Sweet Bitter Cane is a family saga but also an untold story of migrant women – intelligent, courageous and enduring women who were the backbone of the sugarcane industry and who deserve to be remembered.