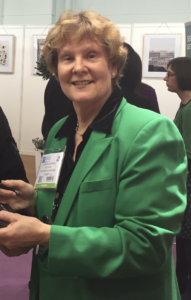 Alison is writes award-winning thrillers featuring tough but compassionate heroines. Her nine-book Roma Nova series is set in an imaginary European country where a remnant of the ancient Roman Empire has survived into the 21st century and is ruled by women who face conspiracy, revolution and heartache but with a sharp line in dialogue.

She blends her fascination for Ancient Rome with six years’ military service and a life of reading crime, historical and thriller fiction. On the way, she collected a BA in modern languages and an MA in history.  Alison now lives in Poitou in France, the home of Mélisende, the heroine of her two contemporary thrillers, Double Identity and Double Pursuit. Oh, and she’s writing the next Roma Nova story.

You can find Alison’s ebook of her new release, Julia Prima, on various retail sites here and the paperback edition here.

You can find all of Alison’s books on her Amazon page.

I hope you enjoy her post on her journey.

When you get a reputation for writing alternative history stories, it can be a surprise, even a shock, to readers when you write ‘straight’ historical fiction.

Let me explain… As a ‘Roman nut’ since the age of eleven, I have a deep interest, possibly an obsession with history, especially Roman history. It led me to go back to university thirty years after I’d first graduated to study to gain an MA in the field. When the creative writing bug bit me twelve years ago, I knew there had to be a strong Roman element. Coupled with that was a desire to write a female lead who drove the story. Roman society was a strongly militarised one with no scope for women soldiers. A dilemma. Then I read Robert Harris’s Fatherland and discovered you could ‘alternate’ history. So I rewrote history along a different timeline. Enter Carina and Aurelia, 21st and 20th century heroines, both Praetorian Special Forces officers serving in Roma Nova, a tiny remnant of the Roman Empire that survived through history. 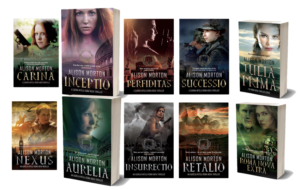 Like any country Roma Nova has its own history. In our real timeline, who today doesn’t have an older relative who remembers ‘the war’? We know exactly which war they are talking about because it was such a formative experience for that generation and the following one. At school, we learn about 1066, American Independence in 1776, the Battle of Waterloo, events long in our past but which have an impact on our countries today. To give Roma Nova a depth and some collective memory, I invented a history for it with roots in real events in the 4th century.

Even in the first hundred pages of Inceptio, the first Roma Nova thriller set in the 21st century, the characters often refer to Julia Bacausa and Lucius Apulius – their legendary ancestors – so when readers said they were thirsty for more, I knew I had to tell the story.

Writing a prequel after I’d written nine books spanning the late 1960s to the present wasn’t straightforward. The scope for massive blooperdom loomed frighteningly large.  Would I be able to remember all the references made by my characters to the past? Star Trek fans will remember the painful ‘Klingon Question’. So I sat down with a new legal pad and re-read the whole series, making notes as you would for any research project. And I’m both pleased and relieved I did. Even for our own beloved creations, few of us have a good enough memory to recall everything.

Why this moment in the late 4th century AD?

The timeline split for the Roma Nova world was triggered in AD 395 when Emperor Theodosius (pushed by Ambrose of Milan) finally outlawed any non-Christian religious activity on pain of death.  Julia Prima is set in our ‘real’ historical timeline between AD 369 and 371, i.e. twenty-five years before that point, at a time when the Roman world was riddled with religious strife and on the brink of transformation. That transformation hasn’t kicked off yet, but by then it’s hovering. No moment in history is fixed; it has its causes – direct and indirect – and its consequences – short term and long term. Behind the personal story of Julia and Lucius, this new book shows how the signs of decline are well and truly there and sets the scene for the start of the collapse.

Alternate history takes off from a point of departure (POD) triggered by an event, large or small. Writers need to use the conditions prevailing at that point as the basis for developing their alternative timeline along historically logic lines. But essentially, you are writing into a void. Even so, I don’t believe you should go completely off-piste and make up a load of implausible nonsense.

With standard historical fiction, there are sources, both documentary and archaeological, sometimes sparse and often biased, but they are something available for reference and consultation, even though analysis of these sometimes causes strong arguments! 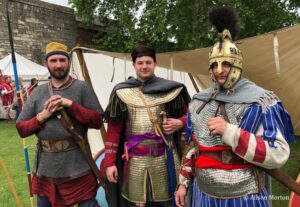 So, historical fiction writers have a skeleton, sometimes a whole body of research to mine for research. But the good historical fiction writer is constrained by being obliged to search out and check existing sources and in my opinion, not wander too far off verifiable facts. You can’t invent new Roman emperors, for example, and retain credibility – we know who they all were!

I’m reasonably familiar with the Roman timeline – people, politics, battles, personal and public environments, occupations, values, the complexity of Roman life – although I did check on many individual things I thought I knew. A great deal had moved on in the centuries since Augustus and Hadrian, from armour and military organisation to clothes, religion and dining arrangements. Although I researched about trekking horses in the 4th century and knew the ‘no stirrups’ rule, I was a little rocky on the practical aspects of riding horses. So I consulted historical fiction legend Helen Hollick who owns and breeds horses and has ridden all her life.  Other ‘Romans’, such as Ruth Downie, author of the Medicus series, helped on travel and Gordon Doherty sent me a wonderful reading list for the 4th century.

I discovered an entirely new (to me) Roman city! Carsulae lies on the western branch of the Via Flaminia and as that was a faster route that the eastern one, my heroine travels along it.  At its height, Carsulae prospered, not least from trade and from the  agricultural activity in the surrounding area. Its country setting in Umbria, large complex of mineralised thermal baths, theatres, temples and other public amenities even attracted wealthy and middle-class visitors from Rome. They were probably seeking relief from Rome in the cooler and healthier hill country. No one knows precisely why Carsulae was abandoned. Possibly it was destroyed and/or was made inhospitable by earthquakes,  or it lost its importance and became increasingly impoverished because most north–south traffic used other, easier, branch of the Via Flaminia to the east, or as it was built in a valley without defensive walls, people moved to better defended settlements as political instability grew in later centuries. I’ve kept it as still lively and active for Julia Prima, but it may not be as thriving in the next Roma Nova foundation story set in twenty-five years’ time ;-)

The main delight was that although its marble and other dressed stone were ‘appropriated’ for later buildings, nobody actually built on top of it! To complete my happiness, I discovered a beautifully produced three-minute video showing a reconstruction of Carsulae.

Writing Julia Prima has been a rigorous but wonderful experience and it has given me the opportunity to add another layer to the Roma Nova story. I hope readers think so too! 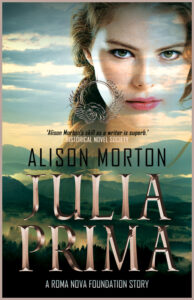 AD 370, Roman frontier province of Noricum. Neither wholly married nor wholly divorced, Julia Bacausa is trapped in the power struggle between the Christian church and her pagan ruler father.

Tribune Lucius Apulius’s career is blighted by his determination to stay faithful to the Roman gods in a Christian empire. Stripped of his command in Britannia, he’s demoted to the backwater of Noricum – and encounters Julia.

Unwittingly, he takes her for a whore. When confronted by who she is, he is overcome with remorse and fear. Despite this disaster, Julia and Lucius are drawn to one another by an irresistible attraction.

But their intensifying bond is broken when Lucius is banished to Rome. Distraught, Julia gambles everything to join him. Following her heart’s desire brings danger she could never have envisaged…

Thanks so much Alison – as you know I’m an ‘early Roman Republican’ but I look forward to learning about the decline of the Empire!