This image will stick in my memory as representing the end and beginning of 2 decades: a young boy fleeing in a boat from the firestorm raging off the shore of the Victorian town of Mallacoota on new year’s eve in Australia at 8 am in the morning. It is reminiscent of accounts of people fleeing the catastrophe of Vesuvius in Pompeii. 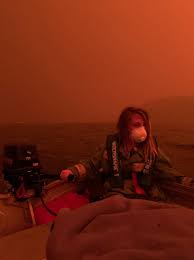 My country is in the midst of an unprecedented crisis with bush fires raging across nearly all States of Australia. The infernos have destroyed over 12 million hectares of land sending people fleeing to the sea to be evacuated while their homes and livestock are incinerated. Pyracumulous clouds are forming, smoke is choking our cities and is spreading as far away as New Zealand. Native wildlife is being decimated and old growth forests lost. It will take at least a decade and billions of dollars to enable ravaged communities to rebuild what they’ve lost.

In an effort to raise money for the volunteer fire fighters ‘fireys’ who have been fighting these fires for months now I’m participating in the #AuthorsforFireys.

Rules are simple. It’s an “auction” over on Twitter. You reply with your pledged donation, and bidding closes on 11pm Sydney time on Saturday 11th Jan 2020. I’ll notify the winners on Sunday, they make a donation to the CFA (Victoria Country Fire Authority) or the RFS (NSW Rural Fire Service), send me the receipt. I’ll then mail the winner a signed copy of my trilogy ‘A Tale of Ancient Rome‘ and organise to give you a one hour tutorial on researching historical fiction if you’re interested.

More details are at the #Authors for Fireys website. 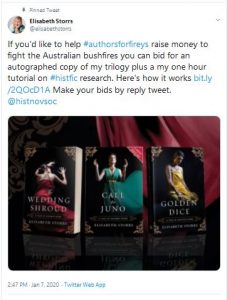 I’d greatly appreciate it if you could help me raise money in the auction for a good cause.

Warm wishes and may 2020 bring rain, prosperity and good health to you.