In the lead up to Mardi Gras season, I  welcome Harry Parsons to Triclinium, to tell us about the history of the Cajun Courir de Mardi Gras. Thanks for sharing your post with us, Harry.

When you think of Mardi Gras, what comes immediately to mind? If you’re like most people, you instantly picture sparkling multi-colored beads, colorful parades, and New Orleans brass band music, all enjoyed over a po’ boy or a steaming dish of jambalaya. However, while those are all unmistakable staples when it comes to a proper Fat Tuesday celebration, there’s a lot more to Mardi Gras than immediately meets the eye.

In Cajun Country, it’s all about Courir de Mardi Gras, instead – a time-honored rural tradition that takes Fat Tuesday to an entirely new level. What is Courir de Mardi Gras? Who celebrates it, what does a celebration entail, and when did the tradition first begin? Let’s take a look at closer look at the answers to all of those questions and many more. 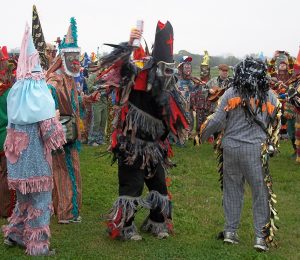 What Is Courir de Mardi Gras?

Courir de Mardi Gras can be roughly translated as “run of Mardi Gras.” However, that “run” has absolutely nothing to do with attending a parade. It doesn’t involve waving your arms in the air in the hopes of catching a string of beads or another small gift as it’s flung from a float, either.

Courir de Mardi Gras finds participants temporarily transforming themselves into beggars. They dress up in costumes but not the colorfully elaborate ones that characterize a standard Mardi Gras celebration. Instead, it’s calico rags and homemade fringe all the way. Revelers also often wear hand-painted homemade masks constructed from wire mesh.

They then go door to door while dancing and drinking. (The end goal is to collect the ingredients for a nice big pot of gumbo.) They also sing and play music as they go. Musicians that play guitar, accordion, or fiddle often accompany the party of beggars. One reveler acts as a captain, keeping everyone in check and giving orders.

Courir de Mardi Gras begging parties can vary greatly in size. Some are only a few dozen people strong, while others can number in the hundreds. Many folks travel along the pre-planned route on foot, but some travel in trailers or wagons pulled by tractors or horses instead. The action (including the drinking) begins in the early morning and continues on through the day and evening.

What Are the Origins of Courir de Mardi Gras?

According to Cajun historians, Courir has its origins in rural medieval France. In Catholic medieval Europe, going begging from house to house was considered socially acceptable behavior, as most of the money in the land was in the hands of the wealthier, well-to-do citizens. When the poor would run short on food and resources in the winter, they’d gather and go door to door, asking for charity in exchange for a song or dance. 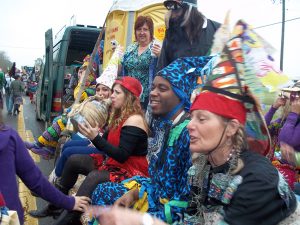 Although the history of Mardi Gras in the United States is somewhat hazy, it’s generally accepted that both the holiday and many of the traditional ways to celebrate had become long-standing traditions by the mid-nineteenth century. Just as the urban sector of New Orleans with its Creole and Anglo-American elites developed traditions like balls, elaborate parades, and lavish parties, working class Cajun communities celebrated with the Courir.

This tradition is explored more fully in Exploring Cajun Country: A Tour of Historic Acadiana by Chere Dastugue Coen. 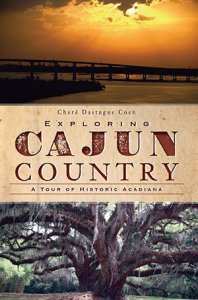 Until World War II, the Courir de Mardi Gras celebration was mostly dominated by men. However, the 1950s would see organized bands of masked women also roaming the country in various regions. (After women entered the workforce during the war, it’s not surprising that they wanted to participate in other commonly male-dominated activities as well.)

Today, there are approximately 30 different versions of the Courir celebrated. However, they can typically be distinguished by the way the revelers travel. As touched on above, some travel completely on foot. Others ride horses or travel in wagons. A Courir group can be made up of all different sorts of people as well. Some groups are all male, while others are all female. Many, many groups are mixed gender. In recent years, groups made up entirely of children have also become common. 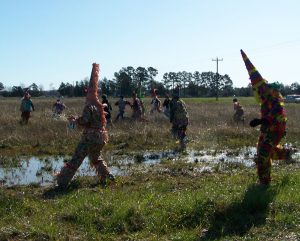 Some Courir celebrations are also distinguished by the use of whips to help maintain order among the travelers. (The whippings are not violent in any way.) Many scholars believe the whipping is a throwback to the pre-Christian Roman festival of Lupercalia which found participants gently whipping women, crop fields, and livestock as a type of fertility blessing. Some Courir traditions find participants willingly enduring their whippings while others call for attempts to take the whip away from the group’s captain.

Harry  Parsons is the content manager for Arcadia Publishing and The History Press. He enjoys anything outdoors, especially if it involves the water. For more glimpses of history, visit Arcadia’s blog.