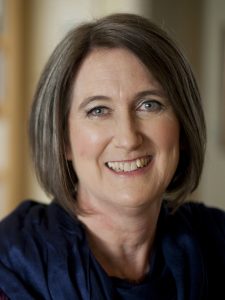 My guest today is award-winning author Judith Starkston, a classicist who feeds her obsession with the Bronze Age world of the Greeks and Hittites by writing historical fiction and fantasy. Her first novel, set in the Trojan War and told from the perspective of the captive woman Briseis, is titled Hand of Fire. She has just released the second book in her Hittite-based series, Sorcery in Alpara, featuring a much-forgotten queen. I interviewed Judith on her sources of inspiration earlier this year. Today she gives us the background to the history of the Hittite queen behind her female protagonist.  You can also read my review of her first Hittite book, Priestess of Ishana here.

I write historical fantasy based on the Bronze Age Hittites (c. 1275 BCE)—an empire of the ancient Near East nearly buried by the sands of time. In spite of the vivid glimpses of this lost kingdom brought to light by recent archaeology and the decipherment and translation of many thousands of clay tablets, there still remain vast gaps in historians’ knowledge. To be honest about my imaginative filling of those gaps, my storytelling combines fantasy and history.

For instance, I give my historical figures fictional names, though often only minimally different from their real names. I also let the magical religious beliefs of these historical people find full expression in the action. My “quarter turn to the fantastic,” to borrow Guy Gavriel Kay’s phrase, allows me to honor what we actually know while also owning up to my inventive extensions. Allowing room for the fantastical elements suggested by Hittite culture makes for the best storytelling.

The main character of my series, Tesha, is based directly on the historical Hittite queen Puduhepa. I chose to name her Tesha after the Hittite word for “dream” because Puduhepa was famous for visionary dreams sent by her goddess. Part of the appeal of writing a series based on Puduhepa comes from the model of female leadership she offers. She reigned for decades over the most powerful empire in the world at that time.

The Hittite empire stretched across what is modern Turkey and parts of Syria and down into Lebanon. It was thus close to Mesopotamia and borrowed a great deal from that and other Near Eastern civilizations. Hittite tradition about queenship, however, is distinctly different. 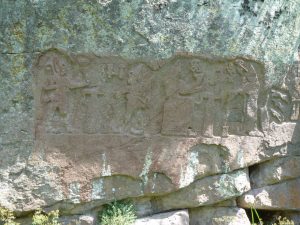 Hittite queens, unlike all the surrounding realms, held independent office for life. When their husbands died, they continued to rule, usually as co-rulers with their sons. The Hittite state allowed a full political role for these women. At the same time, Puduhepa took this allowed role to an active extreme not seen for other Hittite queens. Perhaps there were many other politically energetic queens who are not noted in our scanty historical accounts, but, interestingly and misogynistically, the other active queens we read about are renowned for killing off female rivals by sorcery and scheming to put their sons on the throne and negative acts like these. Puduhepa appears to be an anomaly, despite the powers granted to women by Hittite tradition. However, if there had not been this long tradition of respect for the role and status of queen, Puduhepa’s unique personality would not have had room to express itself.

An equal with her husband

Puduhepa enforced laws in her land to bring about fair justice, even when she had to decide court cases in favor of foreign merchants against her own citizens. She diplomatically corralled Pharaoh Rameses II into a peace treaty that, frankly, she and her husband Hattusili needed more than Egypt did, and she made it last. She held her power with her husband, but they shared equal control, a reality demonstrated visually on the peace treaty drawn up with Egypt. On one side of the version made of solid silver for public display, Puduhepa pressed her seal. On the other side, her husband placed his. They did have a joint seal they could have used, but on this most impressive accomplishment, their independent seals appear. Her judicial decrees and letters to world rulers frequently have only her name and seal on them—she didn’t need her husband’s blessing to administer her authority.

Puduhepa’s international correspondence is extensive. In comparison, we know of only two letters addressed to the Hittite court by Puduhepa’s Egyptian contemporary, Ramses’ wife Naptera, and those letters contain primarily polite greetings from one woman to another. Among Puduhepa’s extant letters are diplomatic exchanges with the kings of Cyprus, Babylonia and other countries. In one letter she grants lands to vassal kings under her sole authority. The Hittite expression, equivalent to “Your Majesty” was “My Sun” and it gets applied to both Puduhepa and Hattusili in the correspondence.

There was an exclusive group in the Late Bronze Age Near Eastern world. Certain kings referred to each other as “brother,” but only the kings of highest power: primarily Egypt, Babylonia and the Hittite Empire. Later, when Assyria’s power was on the rise, an Assyrian king was begrudgingly granted the right to use the term “brother” when addressing the Egyptian or Hittite kings. So how did Ramesses II refer to Queen Puduhepa? As “sister.” He didn’t give his own queens this high status.

Puduhepa ruled in a society that gave her legal rights to her power, unlike the surrounding kingdoms of the ancient Near East, but she also made more extensive use of those rights than any other Hittite queen. Part of this arises from her brilliance and personality. Part also came from the close partnership she shared with her husband. Their love for each other and genuine trust seems to have granted her extraordinary talents the room to flourish. Her accomplishments offer a worthwhile model for the modern world as much as a window into the ancient one. 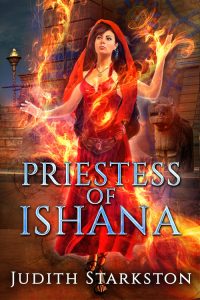 An award-winning epic fantasy, Priestess of Ishana draws on the true-life of a remarkable but little-known Hittite queen who ruled over one of history’s most powerful empires.

A malignant curse from the Underworld threatens Tesha’s city with fiery devastation. The young priestess of Ishana, goddess of love and war, must overcome this demonic darkness. Charred remains of an enemy of the Hitolian Empire reveal both treason and evil magic. Into this crisis, King Hattu, the younger brother of the Great King, arrives to make offerings to the goddess Ishana, but he conceals his true mission in the city. As a connection sparks between King Hattu and Tesha, the Grand Votary accuses Hattu of murderous sorcery. Isolated in prison and facing execution, Hattu’s only hope lies in Tesha to uncover the conspiracy against him. Unfortunately, the Grand Votary is Tesha’s father, a rash, unyielding man, and now her worst enemy. To help Hattu, she must risk destroying her own father.

“What George R.R. Martin’s Game of Thrones did for the War of the Roses, Starkston has done for the forgotten Bronze Age Hittite civilization. Mystery, romance, political intrigue, and magic…” -Amalia Carosella 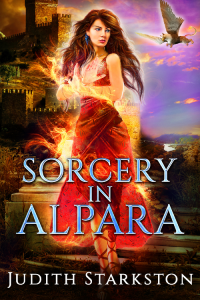 A curse that consumes armies, a court full of traitors, a clutch of angry concubines and fantastical creatures who offer help but hate mankind.

Tesha’s about to become queen of a kingdom under assault from all sides, but she has powerful allies: her strategist husband, his crafty second-in-command, and her brilliant blind sister.

Then betrayal strips her of them all. To save her marriage and her world, she will have to grapple with the serpentine plot against her and unleash the goddess Ishana’s uncontrollable magic—without destroying herself.

“Based on historical events in the Bronze Age, Starkston wraps history and magic together in an unforgettable package.”

If you like unique world building, ancient sorcery, and mythical beasts, with richly portrayed characters and enthrallingly complex plots, then immerse yourself in Sorcery in Alpara, the second in this award-winning epic historical fantasy series. See why readers call the Tesha series “fast-paced,” “psychologically riveting” and “not to be missed.”

Many thanks, Judith. You know how I love strong women of the ancient world. Wonderful to learn of the Hittite queens.