Through the female characters in my ‘A Tale of Ancient Rome’ series, I explore the lives of women in the ancient world. One of my favourite characters in The Wedding Shroud is Erene, the Cretan courtesan who teaches the naïve Roman protagonist, Caecilia, to enjoy the freedoms afforded to Etruscan women rather than cling to the ‘virtues’ taught to her from birth.

“Come,” said Erene, “I will tell you my story. All matrons of Athens and Rome have the same lives, dull and dutiful. It is only what you might become here in Veii that will make you interesting.”

Erene is a hetaira (literally translating as a ‘companion’ in Greek.) As a courtesan, she had unique standing in a man’s world. Accordingly, her character is in a position to compare the cloistered lives of Greek women to those of Etruscan women who were afforded independence, education and sexual freedom (See my post Damn Whores or God’s Police). And while Roman women were granted a form of disenfranchised citizenship, they were also limited to home duties in the very early Republic in which my books are set.

“But now outside my father’s house, I am nothing. Yes, I have often looked on women’s nature in this regard, that we are nothing. When we reach puberty and can understand, we are thrust and sold away from our ancestral gods and from our parents. Some go to strange men’s homes, others to joyless houses, some to hostile. And all this once the first night has yoked us to our husband. We are forced to praise and say that all is well.” 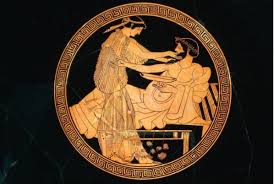 The hetairai (Greek) or hetaerae (Latin) were professional courtesans in ancient Greece who cultivated their beauty, intelligence and commercial acumen to gain a degree of independence far beyond that allowed to married women and their daughters. A hetaira was not a prostitute (pornos) who sold sex, but a sophisticated, educated and talented companion whom wealthy and middle class men hired to act as a hostess at parties known as symposia. Many were known for their prowess as artists and performers. Among the most famous were Aspasia, long-time companion of the Athenian politician Pericles, and Thais, a concubine of Alexander the Great.

Heteirai were reputed to be educated and expected to participate in political discourse with guests. These courtesans were generally foreigners, slaves or freedwoman but were well compensated and able to run businesses which employed entertainers such as musicians, jugglers, dancers, singers and flute girls (who performed sexual favours) to perform at symposia. However, the world of a hetaira should not be romanticised. As it was usual for them to be supported by upper class protectors with whom they formed intimate liaisons, withdrawal of patronage could adversely affect their security. Furthermore, due to the sexual aspects of their profession, the companions were subject to religious disapproval and lived in a demi-monde subject to male authority. Nevertheless, compared to the lives of most Greek women whose primary purpose was procreation, and who were considered to be chattels to be bought, sold and inherited, the hetairai enjoyed a rare status in the Attic world.

You can discover Erene’s fate by buying The Wedding Shroud. Other wonderful female characters in the ‘A Tale of Ancient Rome’ include the Greek slave girl, Cytheris, the Etruscan noblewomen Larthia and Ramutha, as well as  the protagonists of The Golden Dice and Call to Juno: Pinna, the Roman tomb whore, and Semni, the Etruscan artisan and nursemaid.

Subscribe to my Inspiration newsletter for giveaways and insights into history – both trivia and the serious stuff! In appreciation for subscribing, I’m offering an 80 page free short story Dying for Rome -Lucretia’s Tale.