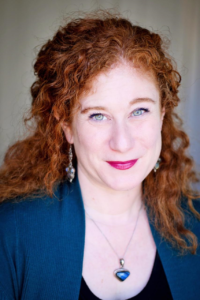 I’m so delighted to welcome fellow ancient world writer, Zenobia Neil, this month. Zenobia was born with a shock of red hair and named after an ancient warrior woman who fought against the Romans. In college, she studied Ancient Greece, Voodoo, and world mythology. She writes historical fantasy about the mythic past and Greek and Roman gods having too much fun. Ariadne Unraveled, a retelling of the Ariadne myth, is her fourth book which has been endorsed by Michelle Moran and Libby Hawker.

You can find a list of all Zenobia’s books on Amazon including Ariadne Unraveled: A Mythic Retelling

My mom and my third-grade teacher encouraged me to write. So I enjoyed writing stories from a young age. The first “book” I wrote was in third grade about a trip to Disneyland where the Pirates of the Caribbean ride is a gateway to a magical world.

As a teenager, I was inspired by Anne Rice, Margaret Atwood, and Stephen King. All three of them gave me new perspectives and a love of story. Anne Rice’s Interview with the Vampire gave me the idea that all historical fiction should contain magic. 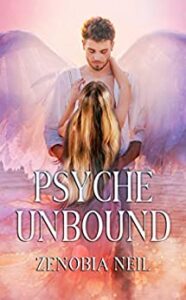 My first published short story was inspired by Robert Graves’s The Greek Myths. I love the way he describes mythology and some of his lines–a magical thong, Aphrodite’s enchanted girdle, lend a seductive air that made me want to delve deeper into the world of Greek myth. Mary Renault was also a huge influence in my desire to write historical fiction. The Persian Boy, her novel about Alexander the Great told from the point of view of his Persian eunuch lover Bagoas, made me want to write history from a different perspective than how stories are usually told. Mary Renault’s The Bull From the Sea and The King Must Die also stoked my interest in the Minoans, Crete, and mythic retellings.

My most recent novel is Ariadne Unraveled: A Mythic Retelling. Although I loved Mary Renault’s books, I kind of hate Theseus as a hero. I realized that many Greek myths are told through an Athenian lens, and I wanted to tell what we think of as the myth of Theseus and the Minotaur through a Minoan perspective.

I decided to write a feminist retelling of a well-known myth. It frustrates me how women like Ariadne are often side notes in Greek mythology. In many versions of the Minotaur myth, all the clever parts, like giving Theseus the string to find his way out of the labyrinth, are ascribed to Dedalus. Instead of portraying Ariadne as a lovestruck princess, I wrote her as a powerful high priestess.

I’ve also always been intrigued by Dionysus and the Minoans. Years ago, at the Getty Villa gift shop, I discovered a book called Bacchus: A Biography by Andrew Dalby. It was a great compilation about Dionysus’s life, mixing all the myths about him from different sources. I can’t remember if it was that book or another that said that no other mythic character died in so many different ways as Ariadne. I wanted to weave all these contradictory myths together to create a new story.

I don’t know if it’s because I’m named Zenobia or because I love Greek mythology, but I’ve always been drawn to the ancient world. I like writing about a place and time where there aren’t as many rules or technology. I feel like I can explore human desires more in ancient times. Probably because of the writers I read when I was younger, I like characters who are a bit bloodthirsty and not concerned with the kinds of things we are in the modern world. I also love writing about the sexual fluidity and diversity of the ancient world.

I read and reread books about Dionysus, the Minoans, ancient wine, Bronze Age Greece, and sailing. I was lucky enough to travel to Crete a few years ago. I had planned a research trip to Greece to go to Sparta. When I was researching my novel The Queen of Warriors: Alexandra of Sparta Book One, the idea for this novel popped up, so I diverted my trip and went to Crete for a few days. Crete is a beautiful, magical place. It was amazing to visit and imagine my characters there thousands of years ago. I’m also in an online Modern Minoan Pagan group—which really shows the relevance of this ancient culture.

Writing Ariadne Unraveled took about five years from start to finish. The more research I did, the more I discovered. Someone in the Modern Minoan Pagan group mentioned the idea of the story of Pasiphae lusting after the sacred bull as a brilliant way for the Athenians to slander a powerful woman. This reminded me about how history is recorded by the victors and how those are the stories that keep getting recorded. That discussion helped me see the myth from the other side. Other writers have written about how the Minoans–a society where women had more freedom– could have been threatening to the Athenians. I loved being able to delve into that more deeply.

Sometimes I use WordHippo.com and sometimes I write “bagel” and come back to that place later. A friend taught me this trick of using a word that I don’t ever use in my novels. No one’s eating bagels in Ancient Crete, so if I need to find that place to substitute a word later, it’s easy to find.

I can share a couple of things. I prefer to have a candle lit when I write, and Ariadne Unraveled was written in almost every room of my house. Midway through writing the book, my daughter decided she didn’t want to share a room with her brother anymore and moved into my office. So I moved my office into my son’s room, where I would write while he played video games in the living room. I also wrote on the dining room table and in my bedroom. Everyone being at home together during the pandemic definitely had its challenges.

I don’t use Scrivener. I sometimes write long hand if I get an idea right before going to bed—which is when all the best ideas seem to come. 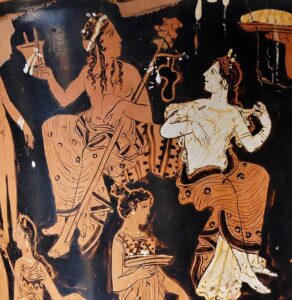 A lot of ancient art inspired me to write Ariadne Unraveled. I always make Pinterest boards of my books and look at art to better understand ancient cultures.

In addition to the Minoan frescoes that I hung up around my desk (in my son’s room), I love paintings of Dionysus and Ariadne from Greek vases. The image of Ariadne and Dionysus together shows their love in a way I don’t see enough in paintings of the gods. This picture inspired my cover artist to create my cover.

Read. Read a lot and write. Realize that it’s a long process that’s greatly fulfilling but also incredibly difficult. Write your first draft for yourself and then edit for an audience. Also, find a writing community. Social media is great for that. There are groups for every kind of writer. It’s wonderful to have writing friends!

Tell us a little more about your books. 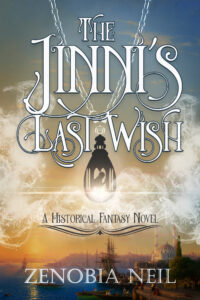 All my books have history, sex, and magic. (I blame Anne Rice for this influence.) I also always want to tell history from unique perspectives.

I have three different series—mythic retellings, Ottoman harem stories and The Queen of Warriors.

My second novel The Jinni’s Last Wish is about a eunuch in the Imperial Ottoman Harem who is given a jinni in a bottle by a mysterious Jewish woman. I also wrote a short lesbian love story, The Odalisque’s Wish, about a girl in the harem who has no interest in bedding the sultan. She just wants to lie around, drinking coffee, smoking hashish, eating pastries, and eyeing the other girls. 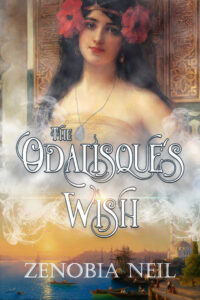 My third novel The Queen of Warriors: Alexandra of Sparta Book One was inspired by Xena Warrior Princess and Mary Renault’s The Persian Boy—only instead of Alexander the Great, I have a Spartan woman warrior who is haunted by the past and searches for redemption in the remains of Alexander the Great’s war-torn empire.

My WIP is the prequel about how Alexandra became the Queen of Warriors. Women in Sparta were not trained to fight, so I wanted to examine how a woman could become the head of an army in the ancient world. I start my novel with the Siege of Sparta in 372 BCE. When I got to Sparta to do research, our archaeological guide took us to the very spot where the siege took place, and a friendly dog immediately ran over to me. I took that as a good omen and can’t wait to dive into this new (ancient) world. 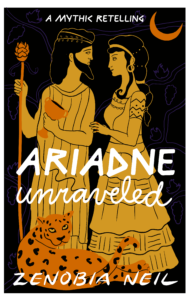 Ariadne, high priestess of Crete, grew up duty-bound to the goddess Artemis. If she takes a husband, she must sacrifice him to her goddess after no more than three years of marriage. For this reason, she refuses to love any man, until a mysterious stranger arrives on her island.

The stranger is Dionysus, the new god of wine, who empowers women and breaks the rules of the old gods. He came to Crete seeking vengeance against Artemis. He never expected to fall in love.

Furious that Dionysus would dare meddle with her high priestess, Artemis threatens to kill Ariadne if Dionysus doesn’t abandon her. Heartbroken, the new god leaves Crete, vowing to become better than the Olympians.

From the bloody labyrinth and the shadows of Hades to the halls of Olympus, Dionysus must find a way to defy Artemis and unite with his true love. Forced to betray her people, Ariadne discovers her own power to choose between the goddess she pledged herself to and the god she loves.

Thanks Zenobia! We have so much in common. The Persian Boy also inspired me to write historical fiction. And the Ariadne myth has always fascinated me especially her love affair with Dionysus. I look forward to reading your mythic retelling. And congratulations on this excellent review from Sarah Johnson on Reading the Past.