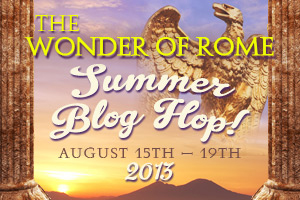 Between 15 – 19thAugust, various historical fiction authors are revelling in the chance to share their love of all things Roman. So here’s your chance to read blog posts on the Wonder of Rome from MC Scott, Helen Hollick, David Pilling, SJA Turney, Heather Domin and many more! But not before you’ve read mine first:)
The Troy Game – labyrinths, legends and triumph over death
Labyrinths have always been a source of fascination. None more so than the lair of the Minotaur in ancient Crete. In the ancient world, the feat of escaping a maze was associated with a triumph of life over death. In some cases, navigating a labyrinth was seen as a form of initiation where a boy was required to enter as a child and emerge as a man.
In ancient times the expression ‘The City of Troy’ was a reference to the great labyrinth in Crete. Yet what was the connection between the legendary cities of Troy and Knossos? An explanation comes from both archaeological evidence and the poetry of the Roman poet, Vergil.
In  the Aeneid, Vergil tells of the epic wanderings of Aeneas, the son of Anchises and Venus, after the fall of Troy. After fighting to defend the doomed city, Aeneas escaped carrying his father on his shoulders while leading his young son Ascanius (who later came to be called Iulus) to safety. According to Roman tradition, during the funeral games for his grandfather, Ascanius took part in a processional parade or dance called the Game of Troy (Lusus Troiae)while mounted on a horse given to him by the Carthaginian queen Dido. The young prince and his companions performed a complex weaving pattern by riding between and around each other as though threading their way through a maze. Vergil drew a comparison between the tortuous convolutions of the rite to the twisting pathways within the Cretan labyrinth at Knossos. He also referred to the manoeuvres of the game as mimicking the ‘Crane Dance’ performed by Theseus and the youths the hero saved from the Minotaur. From Vergil’s description it is clear that completing the game involved great skill to avoid injury or death.
The column split apart
As files in the three squadrons all in line
Turned away, cantering left and right; recalled
They wheeled and dipped their lances for a charge.
They entered then on parades and counter-parades,
The two detachments, matched in the arena,
Winding in and out of one another,
And whipped into sham cavalry skirmishes
By baring backs in flight, then whirling round
With leveled points, then patching up a truce
And riding side by side. So intricate
In ancient times on mountainous Crete they say
The Labyrinth, between walls in the dark,
Ran criss-cross a bewildering thousand ways
Devised by guile, a maze insoluable,
Breaking down every clue to the way out.
So intricate the drill of Trojan boys
Who wove the patterns of their prancing horses,
Figured, in sport, retreats and skirmishes 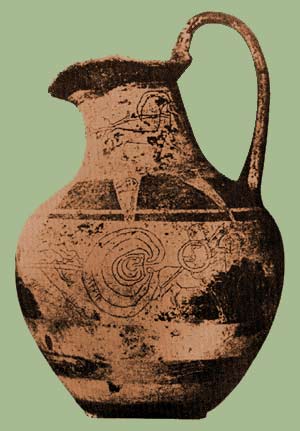 Vergil conjured the image of the Lusus Troiae when writing in the 1st century CE, but there is archaeological evidence of its existence dating from the late C7th BCE. The Tragliatella Vase discovered near the Etruscan city of Caere (modern Cerveteri) depicts two horsemen emerging from a spiral marked with the word ‘Truia’. A line of marching warriors is also displayed on the wine jug which seems to suggest that the vase portrays a military ceremony similar to the one in the legend. As the Romans were heavily influenced by the Etruscans, it is plausible that the equestrian ceremony that was later referred to by Vergil was in fact an Etruscan tradition. 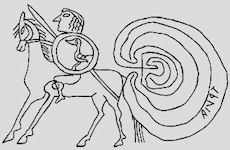 The Game of Troy was ‘revived’ by Julius Caesar who claimed to be a descendant of Iulus (Ascanius) and was performed by the young sons of high ranking Roman families. It was not associated with any particular religious festival and was conducted at funeral games and in military triumphs. Suetonius and Tacitus also wrote of the Lusus Troiae which appears to have become more of a military review by the time of Nero.
With my love of all things Etruscan, I found the etchings on the humble Tragliatella Vase intriguing enough to inspire me to include an episode in The Golden Dice involving the Troy Game.
To the beat of a drum and mellow notes of an aulos, Sethre rode his horse around the ring with a slow, clipped precision. To Caecilia it was as though the animal relished the task, head tucked close to a boastful chest, crest arched, strong legs prancing in time to the music. The rider guided his mount in ever-diminishing circles, each volte tighter, demanding more skill with the shortening of the circuit. Then, at the center, Sethre stopped. Pulling upon the bit gently, he coaxed the stallion to balance itself onto its hocks and then raise its forelegs to display belly to sheath. The horse seemed to revel in the chance to show off its strength, rearing for seconds in the pose.
Caecilia saw that the maneuver had left traces in the sawdust. The hoofprints marked out a perfect spiral, creating the labyrinth called the City of Troy. It was a maze the initiates would enter as boys and emerge from as men.
The crowd erupted in applause.
She clapped loudly. “The boy has talent.”
“We’ll see,” grunted Mastarna. “Drawing the City of Troy is easy. Weaving one through horseflesh and armor is the true test. Let’s see if the lad can keep his seat while avoiding the others’ spears.”

What strikes me most about the Game of Troy is how legend, poetry and history are intertwined and held fast by a strong thread from an epic story that inspired the three great civilisations of Etruria, Greece and Rome.
The Golden Dice is now available as an ebook on Amazon and other retailers here. In celebration of its release I am offering a chance to win a free digital copy if you subscribe to my newsletter and answer three questions about an excerpt of the book which you can read here.

I hope you’ve enjoyed reading about my wonder of Rome. A big thank you to David Pilling for organising the hop – now click on the links below and read much, much more. (And apologies for the double entry for my blog – technical hiccup!)

In addition to the links below – you can also find posts from Scott Hunter and David Blixt.