There is a tale told by Herodatus, the famous Greek historian, about a wily prince called Tyrrhenus who saved his people by encouraging gambling. The story goes like this. Once in the land of Lydia there came a time when the harvest could no longer fill the bellies of all. So the king cast half his subjects, led by his son Tyrrhenus, adrift upon the sea to find another realm or perish. The prince landed safely in Italy, but until crops could be sown and reaped the first survivors had to scrounge for food and shiver through winter. Yet not one person died. For Tyrrhenus commanded that half the people take it in turns to eat the supplies they had brought with them while the other half gambled until spring arrived. Thereafter he called his people the Tyrrhenians. 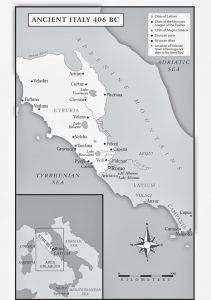 Greeks like Herodatus called these people Tyrrhenians but we know them today as the Etruscans. The land in which they settled was known as Etruria and was primarily located in the areas of Lazio, Umbria and Tuscany. However the Etruscan’s influence spread across Italy, north to the Po River and south to Campania.
The Etruscans features were very distinctive; their straight noses and almond shaped eyes distinguished them from other peoples living in Italy at the time. Their language and script was also markedly different. As a result, their origins have long been debated. Was Herodatus speaking the truth when he said the Etruscans came from Lydia? Or were they simply a people who were native to Italy?

Some modern historians contend the Etruscans were indigenous as did another ancient Greek historian, Dionysius of Halicarnassus, who lived in imperial Roman times. And Livy, a Roman historian who lived in the Augustan age, believed the Etruscans came to Italy from the north, over the Alps. Some current day archaeologists give credence to Herodatus’ claim that the Etruscans migrated from Asia Minor (modern day Turkey) because he lived in the C5th BCE and had contemporary knowledge compared to Dionysius and Livy.
It is no wonder, then, that the Etruscans have been dubbed ‘mysterious.’ But where did they come from? Perhaps all three options are useful when researching the ethnicity of these people. Evidence from the Bronze Age (3300-1200 BCE) established their presence in Italy. By the end of the Iron Age (1200-550 BCE) their culture had flourished to such an extent they controlled a trading empire extending from France and the Black Sea throughout the Mediterranean, Near East and Egypt. Indeed, their sculpture, artwork, decorative furniture, gilded artefacts and jewellery were all heavily reminiscent of Assyrian and Phoenician culture. Consequently it appears Etruscan society could have been based on an existing Italian culture which was further developed with waves of migration over a considerable period of time. 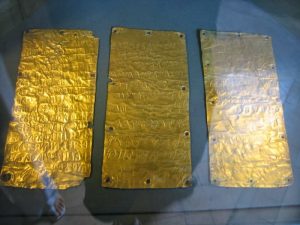 What about genetic testing? Attempts have been made to establish ethnicity through DNA sampling. The result? Inconclusive. A sample taken from the bones found in tombs revealed affinities with European populations whereas genetic material taken from modern day Tuscan descendants shows Near Eastern markers.
And what do the Etruscans themselves say? For many years their language was considered indecipherable but the discovery of three thinly beaten sheets of gold known as the Pyrgi Tablets advanced efforts to decode Etruscan writing. The sheets were engraved with a dedication to the goddess Astarte in both Etruscan and Phoenician script. This bilingual text assisted archaeologists to decipher the Etruscan language just as the Rosetta Stone unlocked the mystery of Egyptian hieroglyphics. Unfortunately, though, understanding their words has not helped. Very little Etruscan literature remains other than inscriptions and the remnants of ritual texts. There are no works by Etruscan historians, poets or writers for us to translate. Instead we are left with the commentary of their victors, the Romans and Greeks.

Whoever the Etruscans were, one thing is certain – their culture fascinates me and has held my attention for over fifteen years of research. They afforded independence, education and sexual freedom to their women. And their religion developed the art of divination to a science. This liberal, mystical and cosmopolitan society inspired me to write the Tales of Ancient Rome series which chronicles the events of a ten year conflict between Republican Rome and Veii, a city described as the ‘jewel in the crown’ of the Etruscan world. It is the tale of two lovers who are blamed for starting a war, and the journey of three women to survive a siege.

This essay was first published as a guest post at HFeBooks.